A man who was paralysed from the chest down following a knife attack can now walk using a frame, following a pioneering cell transplantation treatment developed by Professor Geoffrey Raisman Fellow of the Society of Biology, and applied by surgeons at Wroclaw University Hospital, Poland. 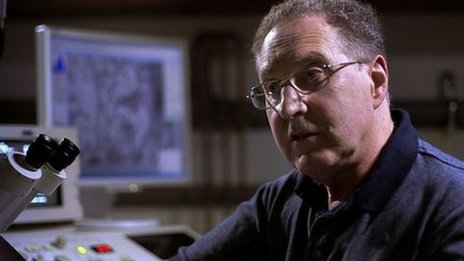 The UK research team, led by Professor Geoff Raisman FSB, Chair of Neural Regeneration at the UCL Institute of Neurology, developed a technique implanting specialist cells from the nose, called olfactory ensheathing cells (OECs), in the spinal cord. OECs allow the nerve cells that give us a sense of smell to grow back when they are damaged.

The 38 year old patient, Darek Fidyka, was paralysed after suffering stab wounds to the back in 2010, leaving an 8mm gap in his spinal cord. He described the ability to walk again using a frame as "an incredible feeling".

Professor Raisman FSB first discovered OECs in 1985 and successfully showed that they could be used to treat spinal injuries in rats in 1997. He joined UCL in 2004 and has spent the past decade developing OEC spinal repair techniques for patients. He was made a Fellow of the Society of Biology in 2011. Now, after decades of hard work, his research has helped a paralysed man to walk again.

Dr Pawel Tabakow, consultant neurosurgeon, Wroclaw University Hospital, who led the Polish research team said: "It's amazing to see how regeneration of the spinal cord, something that was thought impossible for many years, is becoming a reality."

The results achieved for this patient are truly inspiring, although further work is needed to determine whether the technique can be applied to other patients.

Professor Raisman FSB said: "It is immensely gratifying to see that years of research have now led to the development of a safe technique for transplanting cells into the spinal cord. Our goal now is to develop this first procedure to a point where it can be rolled out as a worldwide general approach."

The process has been documented in an exclusive BBC Panorama documentary, 'To Walk Again', and will be broadcast at 22:30 on BBC One this evening (Tuesday 21st October 2014).