Worldwide, 1.3 billion tonnes of food is wasted every year while almost 1 billion people go undernourished and another 1 billion go hungry. How can we feed the world sustainably when the population is expected to rise to 10 billion people by 2066? What will, or should be, on our plates when our current diets are no longer available? 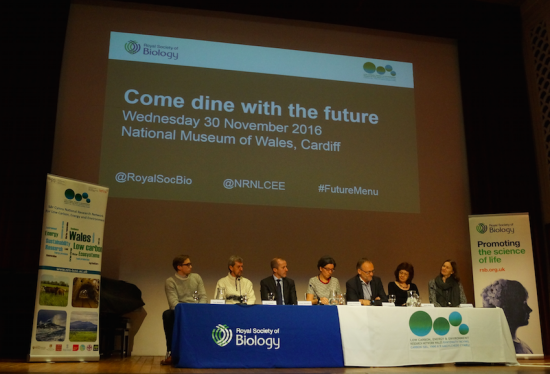 At a special event this week, organised by the Royal Society of Biology and the Sêr Cymru National Research Network for Low Carbon Energy and Environment (NRN-LCEE), food experts from research and industry discussed how our menus might change in 50 years’ time. (Listen to a recording of the event now.)

At the National Museum of Wales in Cardiff, five specialists each presented a three-course meal which they think is representative of the future availability and sustainability of food and discussed how developments in their sectors will shape our future choices.

The wide ranging discussion, chaired by food journalist Diane Fresquez, covered how our diet might be affected by plant and animal disease, climate change and developments in global trade. Panellists focused on how we might use the latest scientific techniques and practices such as aquaculture, genetic engineering, insect eating, urban farming and food sharing, to sustainably feed the growing population.

Chair, Diane Fresquez said: “Yes, we have a food crisis. However, researchers and people from all backgrounds are reacting with a surge of creative, dynamic ideas that are inspiring us to rediscover the pleasure of good food, and good health for ourselves and our environment.

“One superb example is Share City Ireland, a European Research Council-funded project exploring the practices and sustainability potential of food sharing in cities across the globe.”

Professor Helen Sang FRSB, Roslin Institute, suggested we might eat chickens that have been genetically modified to be resistant to major diseases, for example bird flu.

Professor Sang said: “Diseases like bird flu recurrently cause major losses of chickens, which can cause food shortages (for example of eggs), economic losses to farmers, and have negative impacts on chicken welfare.

“We should consider using GM as a way to protect production and bird welfare, in the broader context of reducing waste and increasing productivity.”

Professor Les Firbank FRSB, University of Leeds, suggested that although eating produce grown efficiently and locally will become even more important, there will still be a place for exotic imports, such as papaya and acai berries from the Amazon, especially if they benefit farmers in the developing world.

As part of his menu, Dr Grant Stentiford, Centre for Environment, Fisheries and Aquaculture Science, suggested that farming fish will increasingly supplement capture from the wild and in doing so, help to protect the marine environment.

Professor Achim Dobermann, director of Rothamsted Research, reviewed the pros and cons of each of the five suggested menus before the audience took part in the discussion.

The audience then voted for their favourite courses, choosing Tom Webster’s insect cakes for starter, Katherine Denby’s azolla burger for main course, and Tom’s vegan brownie for desert. Have a look at all of the menu suggestions.

Read more from Les Firbank and Diane Fresquez on the RSB blog.
Check out an animation of the event discussions.

Listen to the speakers' presentations or watch the event now.