A plaque celebrating Dorothy Hodgkin, the UK's only woman to win a scientific Nobel Prize, was unveiled today by the Society of Biology at Sir John Leman High School in Suffolk. 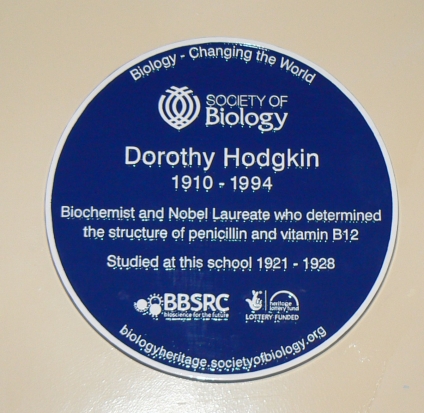 Hodgkin (1910-1994) studied at the school in the 1920s and went on to win a Nobel Prize in 1964 for her work using X-rays to determine the structure of molecules including penicillin and insulin.

At the ceremony Professor Sir Tom Blundell FSB, director of research and professor emeritus in biochemistry at the University of Cambridge, who worked with Dorothy Hodgkin in the 1960-70s, gave a speech:
"Dorothy Crowfoot Hodgkin was not only one of the greatest scientists of the 20th century but also one of the warmest and most human people I have ever known. After working with JD Bernal in Cambridge in the 1930s she pioneered the application of the then relatively new technique of X-ray crystallography to the determination of complex biological molecules like penicillin, vitamin B12 and insulin. She became one of the first women to be elected to the Royal Society.

“Her team was truly international and she influenced the development of science in China, India and South America. Although her husband was often away in Ghana, she brought up a family while working full time. The students, post-doctorals and visiting researchers in her group became part of a large international family that remains close and inspires their students and friends throughout the world with the Hodgkin approach to science.”

Dorothy lived in Geldeston in Norfolk for most of her childhood, and went to school in Beccles from 1921-28. Her teacher, Miss Deeley, allowed her and one other girl, Norah Pusey, to join the boys doing chemistry at school.

Dorothy went on to study at the Universities of Oxford and Cambridge and was one of the first people to use X-rays to study the structure of biological molecules. She developed the ‘X-ray crystallography’ technique to reveal the molecular skeletons of penicillin, vitamin B12 and insulin. Her discoveries have allowed us to better understand a range of illnesses, including diabetes, and in some cases to make synthetic versions of proteins as treatments. X-ray crystallography continues to be an important tool in understanding disease and designing new medicines.