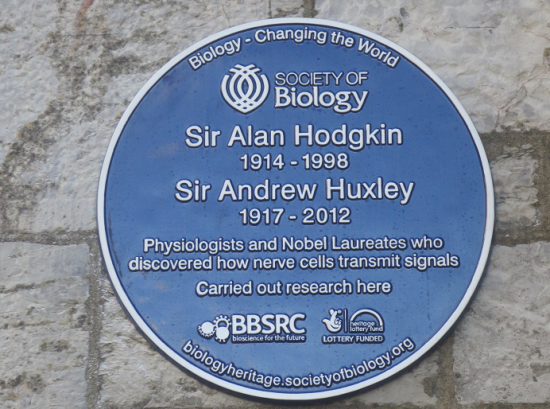 Sir Alan Hodgkin and Sir Andrew Huxley, carried out research at the Marine Biological Association (MBA), before and after the Second World War and went on to win a Nobel Prize for discovering how nerve cells transmit signals.

Professor Colin Brownlee FSB, director of the MBA, made a speech at the ceremony:
“Just over 75 years ago, Alan Hodgkin and Andrew Huxley, two Cambridge-based scientists, working at the MBA in Plymouth seized upon an important discovery, that the long finned squid found in the seas off Plymouth possessed a giant nerve fibre. This nerve fibre was about a hundred times thicker than normal nerve fibres. Crucially the giant nerve fibre was large enough to allow an electrode to be inserted along its length, enabling the voltage across the cell membrane to be recorded. Their subsequent experiments revealed how signals are sent along nerves – essentially how we see, hear and feel things and how our brains work. Their contribution to understanding the functions of the nervous system and brain cannot be overestimated. For their work they were awarded a share of the 1963 Nobel Prize for Physiology or Medicine.”