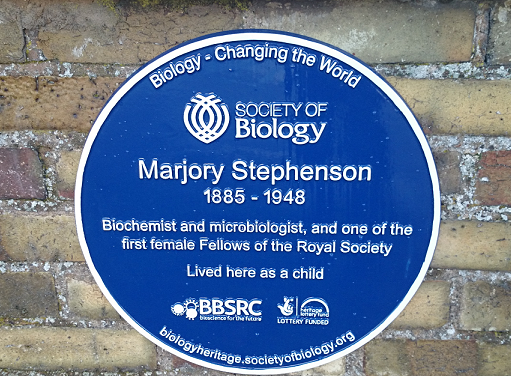 Stephenson (1885–1948) lived at Pit’s Farm on the site as a child and went on to become a scientific pioneer and one of the first female Fellows of The Royal Society. The Society of Biology is installing the plaque as part of a new series of ten blue plaques around the UK celebrating the eminent but sometimes unsung heroes of biology.

At the unveiling ceremony Sir John Skehel, Vice President of The Royal Society, gave a speech:
“Marjory Stephenson was primarily an experimentalist, always eager to exploit a range of techniques to understand the biological properties of bacteria. Through this approach she was an inspiration to subsequent leaders in microbiology.

Sir James Paice, MP for South East Cambridgeshire, also spoke at the event in celebration of this local hero.

Stephenson was born in Burwell in 1885, the youngest child of a scientifically-minded fruit farmer. She enrolled at Newnham College, Cambridge in 1903, at a time when the female students still wore long skirts, undertook practical classes separately from male students and were chaperoned to lectures outside the college.

Her early career in teaching was interrupted by the First World War when Stephenson joined the Red Cross, where she ran kitchens in France. In 1918 she was awarded an MBE and an Associate Royal Red Cross.

In 1928, Stephenson became the first person to isolate an enzyme from a bacteria cell (E. coli). In 1930 she wrote Bacterial Metabolism which became a standard textbook for generations of microbiologists. In 1945 she was one of two women to become the first to be elected as a Fellow to the Royal Society (the other was Kathleen Lonsdale). She was also a founder member of the Society for General Microbiology and became its President.

The new series of celebratory plaques include those to: in Suffolk, Dorothy Hodgkin, who discovered the structure of Penicillin; Steptoe, Edwards and Purdy, IVF pioneers, in Oldham; and Dolly the Sheep, and the team who created her, in Edinburgh.