The handover took place at this year’s Annual General Meeting, which was held in person for the first time since the pandemic.

Professor Boyd is professor of biology at the University of St Andrews, where his research focuses on the behaviour of marine predators, marine ecosystem management, and the interface between ecology and economics. 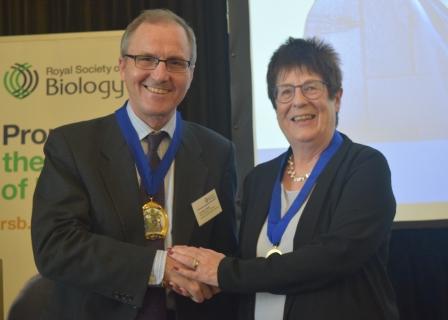 Professor Boyd was the chief scientific adviser at Defra between 2012 and 2019 and is part of the Scientific Advisory Group for Emergencies (SAGE). He also chairs the UK’s Research Integrity Office and was elected as a Fellow of the Royal Society in 2021.

Professor Boyd said of taking on the role: “Professor Dame Julia Goodfellow has steered the Society for the past five years with exemplary skill, making her a hard act to follow.

“She has set a standard that I will endeavour to maintain. Thank you so much for your loyal service, Julia.

“The work done by the Society is an increasingly important part of broadening the scope of the appreciation and study of biology.

“I look forward to helping the Society to be a leading light in the post-COVID era when our understanding of biology will be important for future resilience.”

Professor Goodfellow said of her successor: “I am very pleased to welcome Professor Sir Ian Boyd FRSB as the next President of the Royal Society of Biology.

“I want to thank all of our members, staff and Council members for their support over the last four very interesting years. The bioscience community has been outstanding in its work throughout the pandemic.”

More than one hundred members, Fellows, and Member Organisation representatives came together at the Law Society in London to attend this year’s AGM. 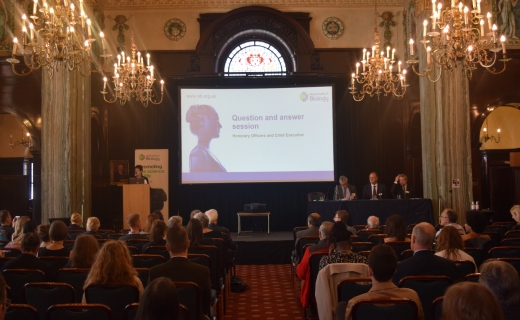 The venue for this year's AGM

The meeting included an overview of the last year of RSB activity by Dr Mark Downs CBiol CSci FRSB, chief executive of the RSB, as well as a summary of the annual report and accounts by Dr Paul Brooker CBiol FRSB, Honorary Treasurer, and a question and answer session.

Professor Patricia Kuwabara FRSB and Professor Yvonne Barnett FRSB were confirmed as Council members for a second term. Professor Claire Wathes FRSB was confirmed as incoming Honorary Secretary, with Professor Richard Reece CBiol FRSB stepping down after his fifth year. Dr Brooker will continue as Honorary Treasurer for his fifth and final year.

Professor Boyd then presented the President’s Medal to three members who have gone above and beyond and have had a significant impact on the organisation. He welcomed the opportunity to award these following the pandemic interval in which these annual awards were not given. 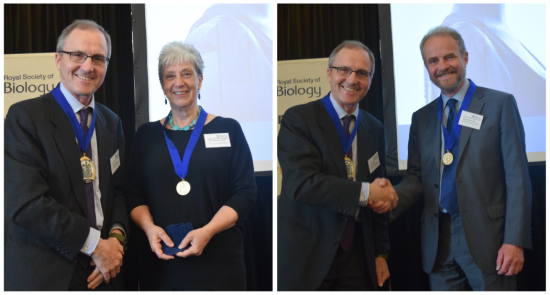 The AGM was followed by the Charter Lecture delivered by RSB Council member Dr Suzy Moody MRSB, titled “Celebrating diversity: the joys of being a zebra among horses.”

A recording of the AGM and the Charter Lecture will be available online soon.