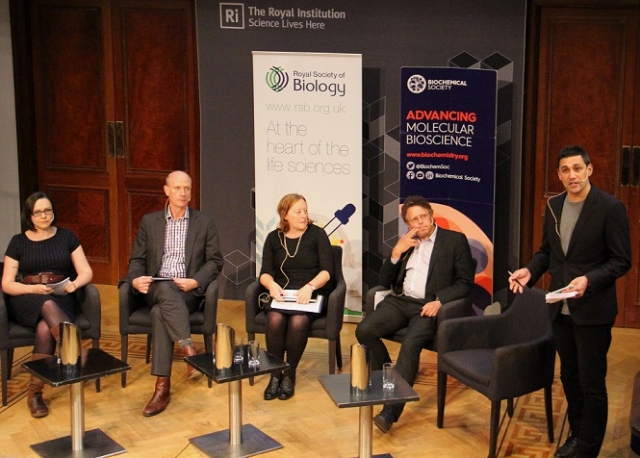 Last night, the Royal Institution’s lecture theatre was at full capacity with over 400 guests of varying ages and scientific backgrounds, eager to debate the topic of synthetic biology.

Organised by the Royal Society of Biology and the Biochemical Society for Biology Week 2015, the event featured a panel of four scientists chaired by well-known geneticist and broadcaster Dr Adam Rutherford.

Synthetic biology is a field which seems to defy definition. Rutherford kick-started the event by attempting to pin down a concise description: “new techniques to modify biology, primarily at the level of DNA, with useful purpose.”

The debate aimed to examine three uses of synthetic biology; food, waste and health; and to scrutinise the societal and ethical implications of the use of this technology.

Professor Robert Edwards, University of Newcastle, started boldly, suggesting synthetic biology could be the answer to the global food crisis. With a trilemma of rapid population growth (200 more ‘consumers’ are born every day), an unstable climate and resource depletion, we have a pressing demand to increase food production. 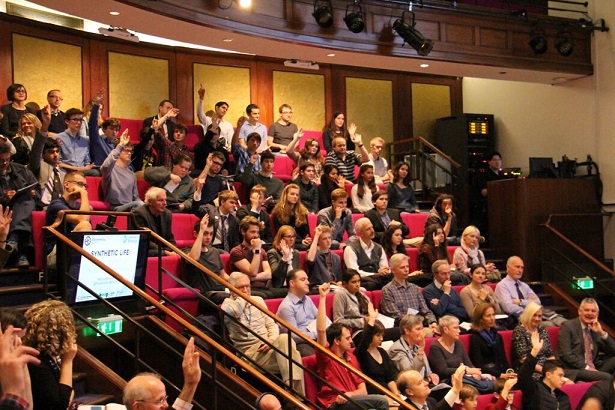 “We could make a stem cell burger, garnish it with a genetically modified salad and extrude a nice polysaccharide bun from a reactor. All of these things can be done sustainably, but are they desirable? I certainly don’t think so at the moment.”

Whilst Professor Edwards admitted that the public are particularly sensitive about food engineering, he argued synthetic biology could provide the second Green Revolution the world so desperately needs.

Dr Louise Horsfall MRSB, University of Edinburgh, took to the floor next to discuss waste management. She explained how synthetic biology could provide the tools and techniques needed to design and engineer microorganisms to degrade man-made plastics in our environment.

“We currently live in a linear economy, and this planet has a finite amount of resources, and only a tiny proportion of our waste is being recycled and repurposed for further use." She explained that synthetic biology could drastically change this and instead create a circle of ‘living systems’, capable of recycling biological nutrients, degrading man-made rubbish and reclaiming metals from contaminated land.

Horsfall asked: Should we release synthetic organisms into oceans to biodegrade plastics? The audience was split 50:50.

Professor Paul Freemont FRSB, Imperial College London, posed many ‘what if’ scenarios, giving the audience an insight into the endless possibilities of synthetic biology being used in healthcare.

The engineered bacteria E. chromi. for example would live in your digestive system and indicate the state of your health by the colour of your faeces; acting as “cheap, personalised disease monitoring from the inside out.”

Freemont asked: Would you have your genome edited if it ensured genetic wellbeing of your children? 70% of the audience said yes.

Professor Freemont concluded “The limits of synthetic biology will not necessarily be technical, but societal, in that the applications will need to be proved and accepted.”

Dr Susan Molyneux-Hodgson, University of Sheffield, outlined her research into synthetic biologists themselves. Social scientist Molyneux-Hodgson questioned why we continue to separate the technical from the social, the science from the ethics, and the facts from the values. She argued that science always seems to come first, whilst ethics and legal matters are worried about afterwards.

Molyneux-Hodgson asked: Should we focus on understanding the process of synthetic biology, or the products? 70% of audience voted in favour of products over process.

A lively debate followed with many interesting questions from the audience, including what would happen to synthetically engineered microorganisms after they had degraded plastics in the oceans, and whether the public or expert scientists should or would like to decide how best to spend scarce science funding on various synthetic biology technologies.

Read how the debate unfolded via social media on Storify.

A full write up of the debate will be featured in the next issues of The Biologist and The Biochemist.

Find out what is going on in your area and online this Biology Week.