Professor Sir Alec Jeffreys FRS Hon FRSB, inventor of DNA fingerprinting, shared his inspiring story with Dr Alison Woollard FRSB and an audience of over 300 people at a special fundraising event for the Royal Society of Biology at the Science Museum in London last night. 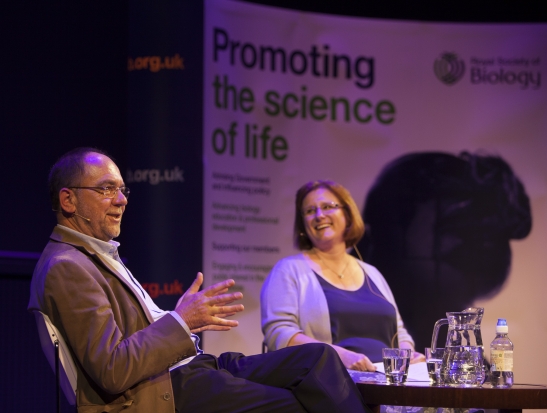 In the 1980s Sir Alec discovered a method of identifying individuals using their genetic code while working at The University of Leicester. He described the moment he discovered DNA identification on 10th September 1984 as ‘standing in the darkroom looking at this bit of film and suddenly realising there was a door in front of me I didn’t even know existed which had suddenly swung open.’

Soon after, having successfully applied his new technology in immigration cases, Sir Alec’s lab was asked to help the Leicestershire police in the investigation of two rape and murder cases. Alec had no hesitation to help and this led to the very first use of DNA evidence in a criminal case, in which it exonerated a man who had given a false confession. ‘I have very little doubt that had there been no DNA evidence he would’ve gone to trial, been convicted and faced the rest of his life in jail’, Alec said. The guilty man was found soon after through a process of screening thousands of men in the local area.

After showing clips from Code of a Killer, the 2015 ITV dramatisation of his story, Sir Alec was keen to set the story straight, ‘anybody that’s seen it will have seen me on a mission over years trying to come up with a method for DNA based identification, and that wasn’t the case at all, we got that first DNA fingerprint by accident. It was within less than a minute that that eureka moment really did happen.’

Alec stressed that, ‘If you don’t fund blue skies research you’re not going to get weird and wonderful technologies like this emerging’. He later highlighted the impact of the technology, ‘whether it’s paternity, immigration or criminal cases, I think a reasonable estimate is that worldwide between 50-70 million people have now been touched by it. So as scientists justifying their Government funding that’s not bad!’

Alec described how he got into science at an early age, after being bought a microscope and chemistry set by his dad on his 8th birthday. Describing himself as a ‘truly horrible kid’ he revealed that he now wears a beard to hide a sulphuric acid scar that he suffered while trying to make hydrogen cyanide gas in his childhood sitting room.

Responding to lively questions from the audience, Sir Alec expressed his doubts about the idea of a compulsory nationwide DNA database, ‘no database is perfect, some glitch could happen, whereby my DNA profile might come into a police investigation. So what is the benefit to me as an individual of being on that database? None. Is there a risk? Yes.’ He also spoke about the ‘real risk of a massive invasion of personal privacy’ through state surveillance.

On the subject of testing for genetic predispositions to diseases and the prospect of personalised medicine, Alec explained, ‘maybe we can recommend either medication or a change in lifestyle that could ameliorate genetic risks. That may be perceived as really good news, others may see it as the NHS playing big brother with your genome.’ Adding, ‘science and technology often runs way ahead of ethical and social debate and certainly of political decision making. Scientists are very good at coming up with whizzy new ideas. But don’t rely on us for ethical decisions. It’s up to you.’

Supported by Unilever, the event raised £6,500 which will go towards the RSB's charitable aims. The Society offers a range of support for people working in the life sciences, and aims to inspire and inform all, about the wonders of biology.

Listen to a recording of the interview and see a photo gallery on our event page. See how the event unfolded via social media on our Storify. A full account of the evening will be published in The Biologist later in the year.

Read up on forensics our blog: STR Trek: the Next Generation, The Proof is in the Shoeprint, Code of a Killer: Deciphering the Science, Sir Alec Jeffreys and DNA Fingerprinting.