Starling populations declined in the UK by 79% between 1970 and 2009. However, there is currently no map of murmuration sites. This survey could reveal important information about where, and over what habitat, large murmurations occur. Brighton pier, Blackpool pier, Newport wetlands, Gretna Green, and Belfast city centre are all well known murmuration sites. However, the survey's latest starling murmuration map, shows just how widespread this behaviour is. Many of the busiest sites, for example Wigtown and Galloway, are not traditional hot spots. 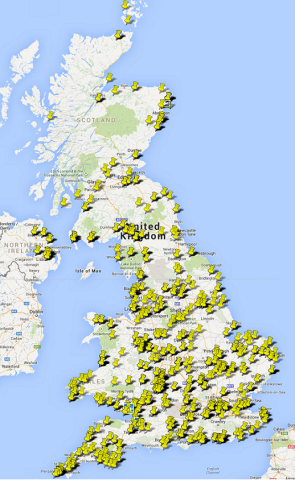 Sightings have occurred all over the country and in all weather conditions including clear skies and heavy rain and in a variety of temperatures from 2-20°C.

Around 20% of respondents so far have reported potential predators, including sparrowhawks, peregrine falcons, marsh harriers and buzzards. There are also reports of gulls in the area, which are not a predator, seemingly altering starling behaviour.

Dr Anne Goodenough from the University of Gloucestershire said “if murmuration behaviour is primarily ‘anti-predator’ we might be able to analyse whether predator presence links to the length or complexity of murmurations displays and also whether different predators elicit different responses."

Up to 100,000 birds have been seen taking part in these magnificent aerial displays (eg. one sighting near Liverpool). However murmurations commonly involve around 40,000 birds and can be as small as 200 birds. Many murmurations in the survey have lasted over half an hour, but one in Newcastle upon Tyne lasted over an hour.

The survey will stay open throughout the winter and close in March 2015. There are more starlings in the UK in the winter because birds that are resident year-round in the UK are joined by additional birds from Continental Europe. In the spring and summer the birds are breeding and raising young.

Dr Goodenough said, “It is possible that murmurations occur as a 'signpost' to roosts - a way of getting multiple birds together in one area before dropping down to roost for the night. As it is warmer roosting as part of a big group it is possible that there is more stimulus for murmurations in cold weather.” 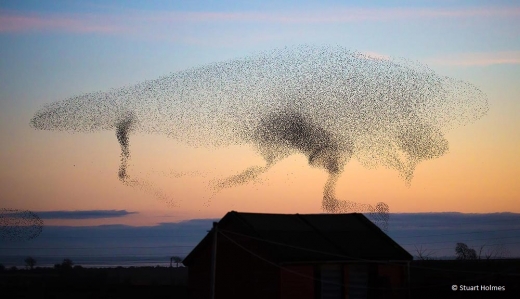 There are other species of birds that flock together and undertake unusual movement, especially in the presence of a predator. But the regular sustained aerial displays, particularly before roosting, are most obvious in the European starling. “That makes this topic a really fascinating one to study. If we can work out exactly why starlings murmurate, maybe it will be a good way in to working out why many other species do not!”

Take part in the Starling Survey.