Today, Major Tim Peake answered questions from MPs and Ministers as part of the Royal Society of Biology’s Voice of the Future event in Parliament.

The whole event, in which early career researchers descend on the Houses of Commons to grill MPs and Ministers on their science policies, was broadcast live on Parliament TV.

A video of Tim Peake, recorded earlier this week on the International Space Station, was shown as part of the event. It featured the British astronaut answering questions from Jo Johnson MP, Minister for Universities and Science, on biology experiments he is doing in space, and what more might be possible in future. 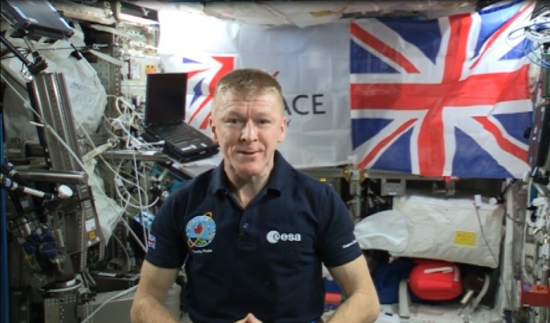 Peake described how his experiments often focus on understanding the body’s ageing process and finding ways to counter the negative effects of growing old.

“Last week I conducted several ultrasounds to investigate increased stiffness of my arteries due to accelerated ageing caused by microgravity”, he said.

Peake praised the UK’s commitment to helping to lead Europe in collaborative research and technological development through the European Space Agency: “Our contributions to ESA make a real difference to industry and to universities”.

He believes “the future of scientific exploration lies in space”, and looks forward to our future trips to the moon and Mars to help understand the fragility of our planet and how it works, “so that we can take good care of it”.

Nicola Blackwood MP, Chair of the Science and Technology Committee asked Peake about the impact he hopes his space mission will have on the development of the UK space sector.

Peake said that, “in order to continue the success of the UK’s vibrant space sector, we need to create opportunities for growth, and to inspire our younger generation to gain the skills that they need for the exciting careers that await them in the space sector.”

He believes that “in the not too distant future, human space flight will become as routine as commercial aviation is today” and that “the UK is well placed to play a key role in developing the capabilities that are needed to achieve this.”

Jon Kudlick, director of communications at the Royal Society of Biology said:
“We are thrilled that Major Tim Peake is part of this event in which policy makers come face to face with early career researchers. What better way to highlight the achievements of UK science and bring the importance of supporting it to policy makers’ attention, than with an historic video beamed from 250 miles above the earth.”

In the first event of its kind since the General Election, young scientists and engineers questioned the Science and Universities Minister, the Shadow Science Minister, the Government’s Chief Scientific Advisor and Members of the House of Commons Science and Technology Select Committee about scientific issues that matter to them.

Dr Stephen Benn, director of parliamentary affairs at the Royal Society of Biology, described the importance of Voice of the Future:
“This is a unique event – in no other part of Parliament is the normal select committee format completely reversed so that MPs, the Minister and the Shadow Minister have to answer questions rather than ask them.”

“It is important that policy makers use reliable evidence in their decisions, and today’s young scientists and engineers will be a vital part of this in the future.”

Voice of the Future 2016 was held in the Boothroyd Room, a room which has heard Prime Ministers as well as eminent scientists and experts give evidence. However, this time the MPs’ committee seats were occupied by young people and the MPs sat in the witness seats to be grilled.