The Past, Present and Future of Marine Biology in Hong Kong

The Hong Kong branch held a very successful talk on The Past, Present and Future of Marine Biology in Hong Kong. Members could choose to attend in person or via Zoom. Even though we had a few technical hiccups, the event went smoothly. 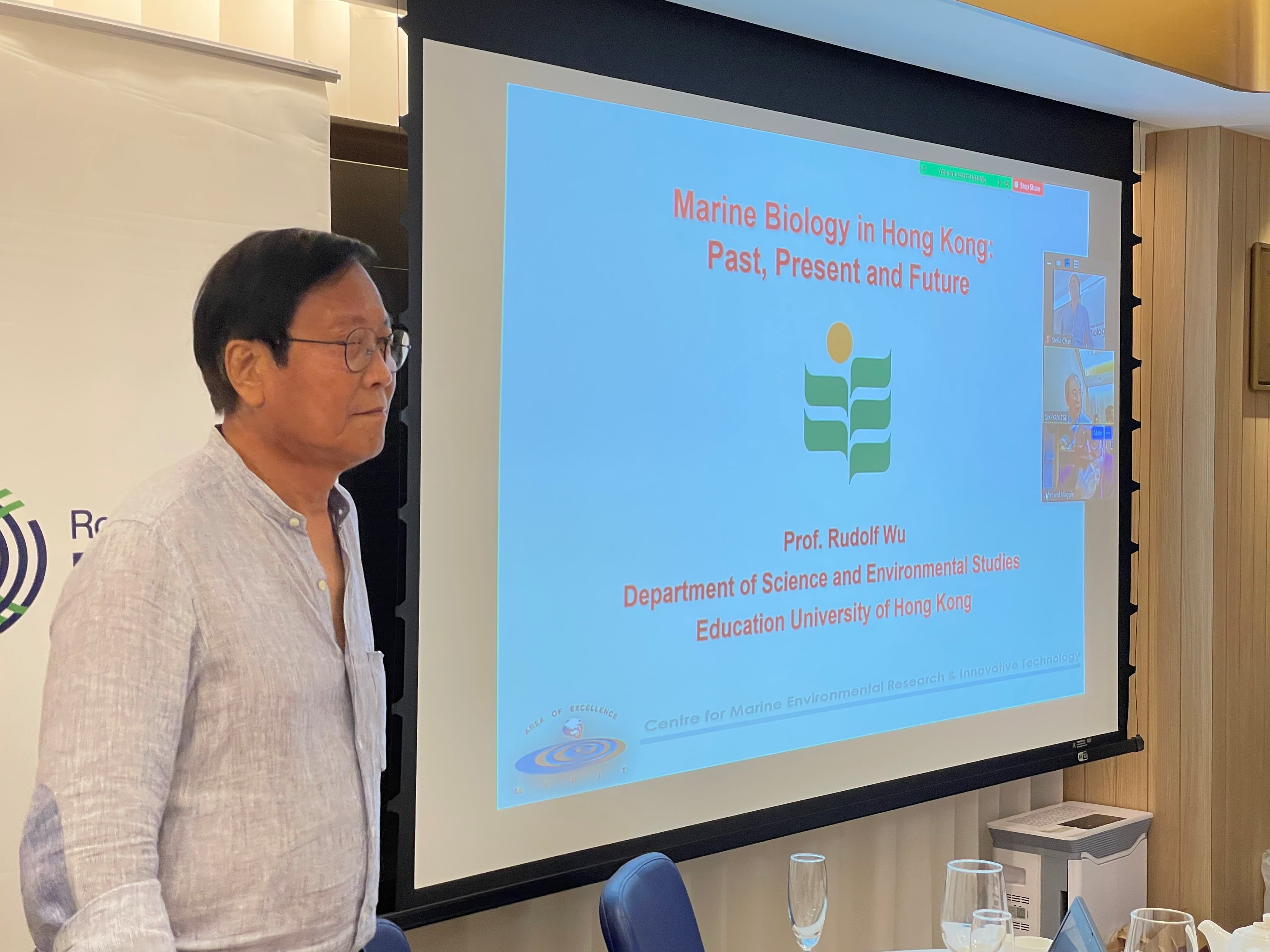 The Chairman of the Hong Kong branch, Mr Sik Yan Tse CBiol FRSB KR, introduced our honourable guest and speaker for the evening, Professor Rudolf WU (above), director and chair professor, The Education University of Hong Kong. Professor WU is an entertaining speaker and painted a vivid picture.

Everyone who attended learned a lot and is eager to do their part to further marine biology in Hong Kong. The talk was followed by a question-and-answer session.

After the talk, the members present at the venue were invited to join Professor Rudolf WU in a most delicious Chinese Dinner at the Hong Kong University Alumni Association restaurant. Everyone had a lovely time.

The fifth AGM of the Hong Kong branch

This is the first time that we had a blended AGM with some of our members joining online through Zoom and some of our members joining in person. On the one hand, due to the social distancing restrictions, only a few people could attend in person, but on the other hand, because of the online component of the AGM, we were able to have guests from the Head Office in London attending the meeting. 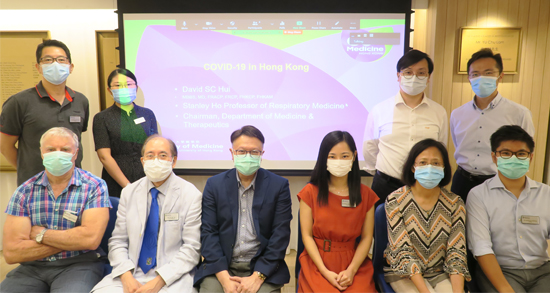 The meeting was started by the chairman, Mr Tse Sik-Yan CBiol FRSB KR, who opened the meeting and welcomed everyone. The honorary treasurer, Dr Gabriel Fuk Ki Lee FRSB, then gave the financial report of the Hong Kong branch and it was accepted by the assembly.

Professor Gordon Maxwell FRSB reported on the Tap Mun Field Trip, it was really fun and gave the members of the Hong Kong branch a chance to get to know each other socially. Dr Anthony Cheung MRSB introduced branches inaugural Poetry Competition which has a “Living things of Hong Kong” theme. We are all eagerly awaiting the results of the competition.

The following people were proposed and confirmed as committee members for the next term:

With no other business, the chairman closed the meeting and invited our honourable guest Professor David S C HUI, Stanley Ho professor of respiratory medicine, CUHK to give a talk on COVID-19 in Hong Kong. The enlighten talk was followed by a question and answer session.

After the talk, the members present in person at the venue were invited to join in a most delicious Chinese Dinner at the Hong Kong University Alumni Association restaurant.

We challenged students to draw specimens that can be observed in Hong Kong. Drawings had to be accompanied by a photo of the live and/or preserved specimen and the person entering the competition should have taken the photo themselves. We really hope that everyone who entered the competition had a wonderful time exploring Hong Kong’s rich biodiversity and have deepened their passion for nature.

Congratulations to the four winners in the Hong Kong Specimen Drawing Competition 2019: 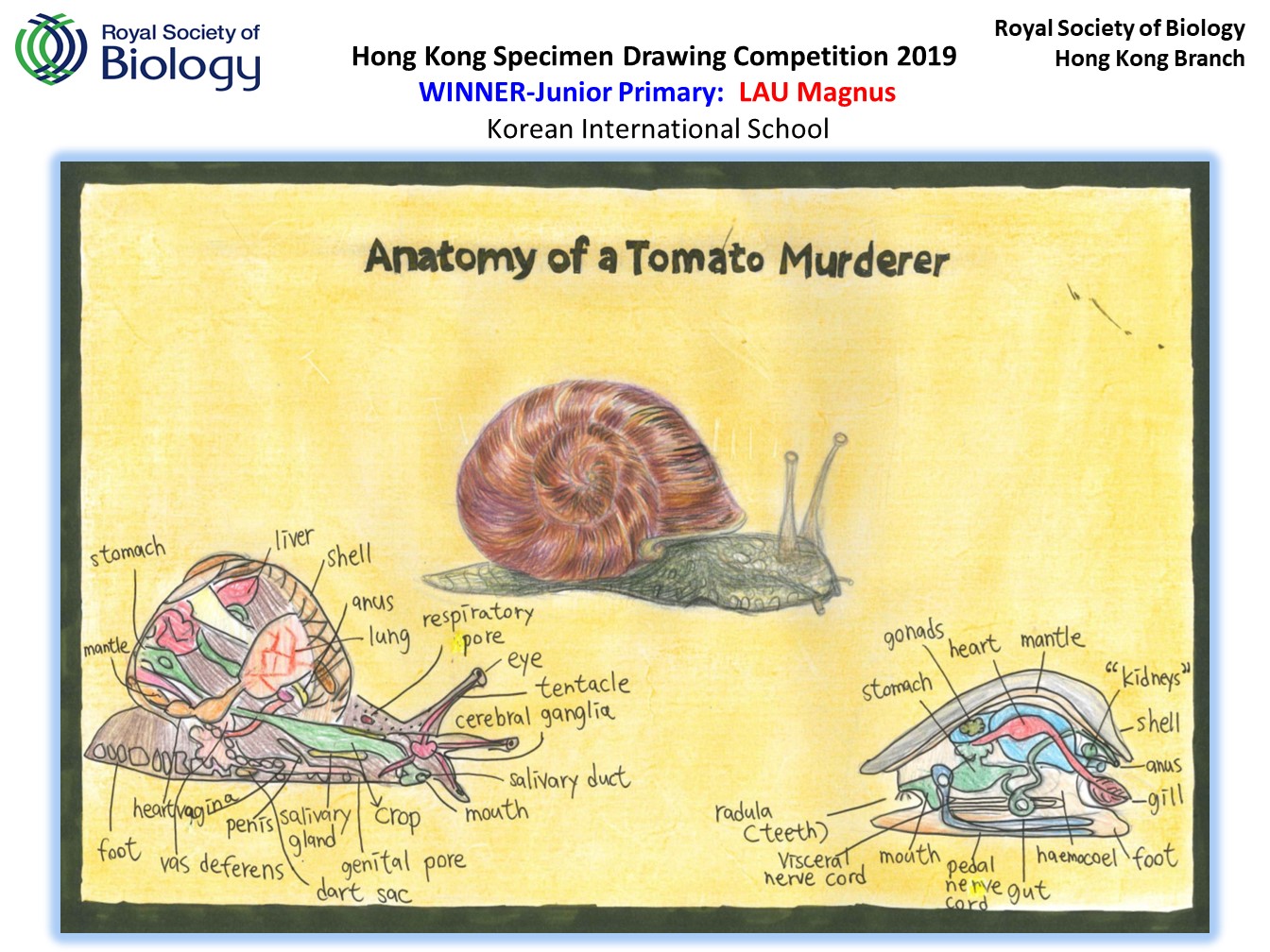 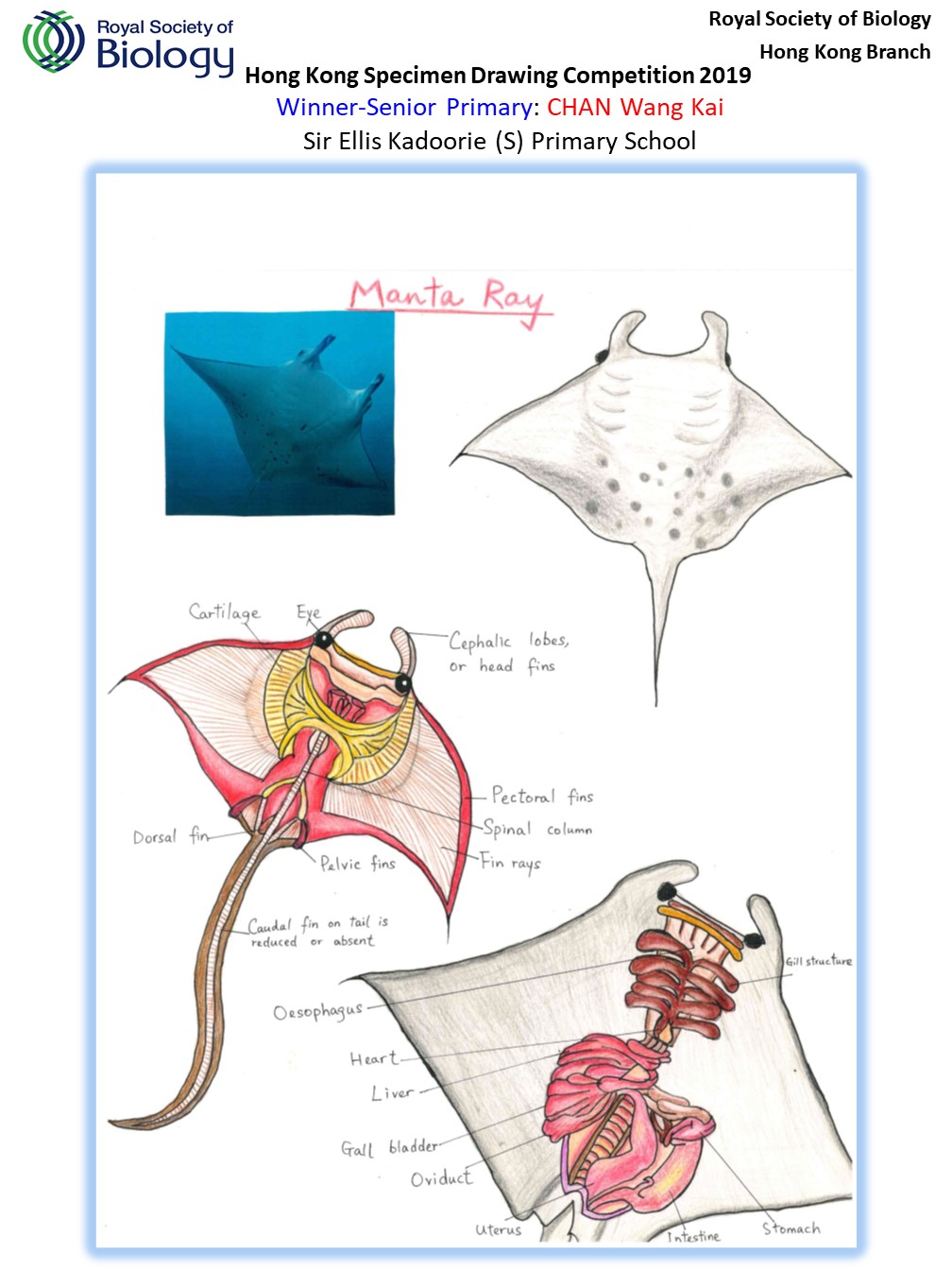 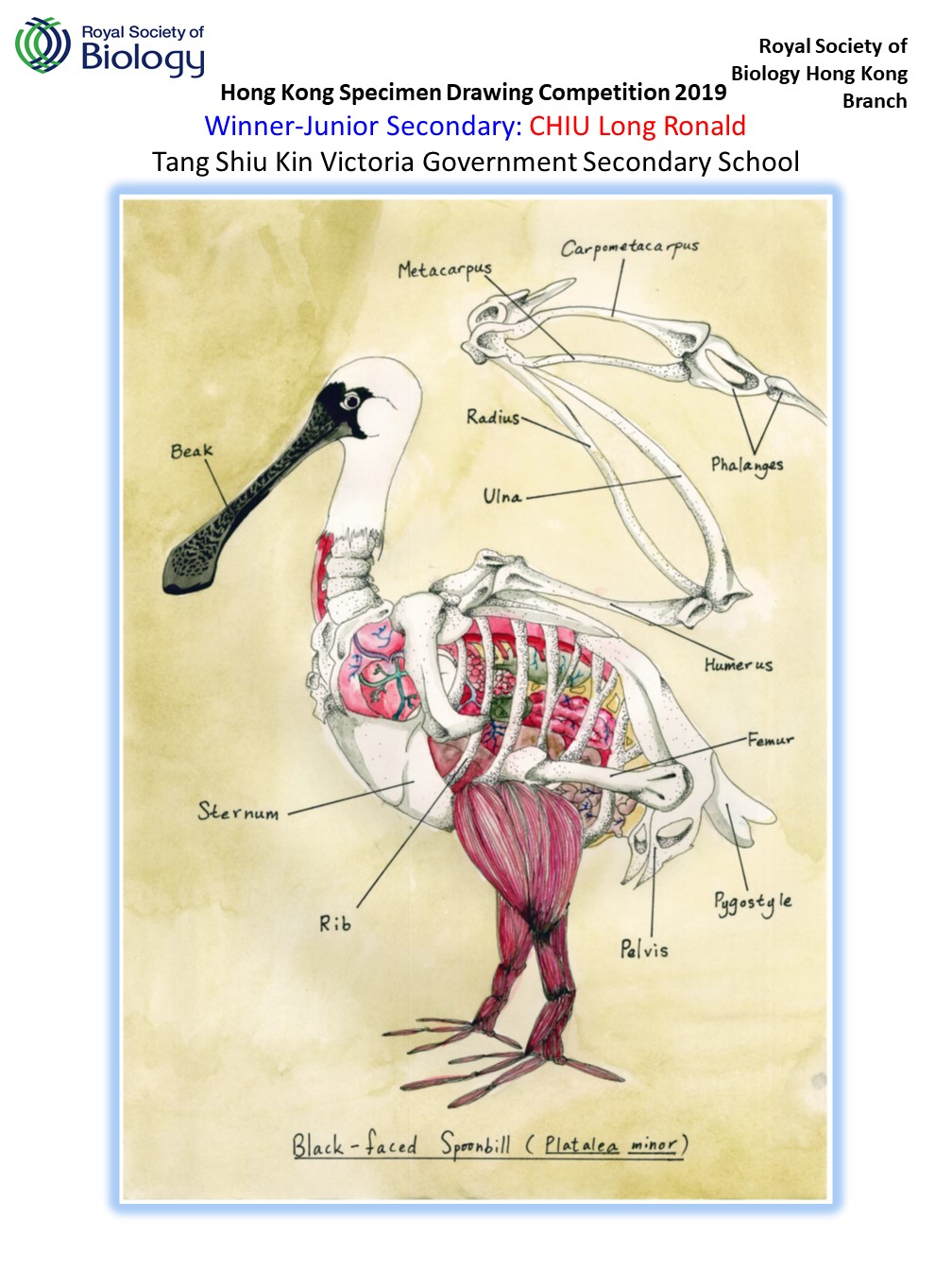 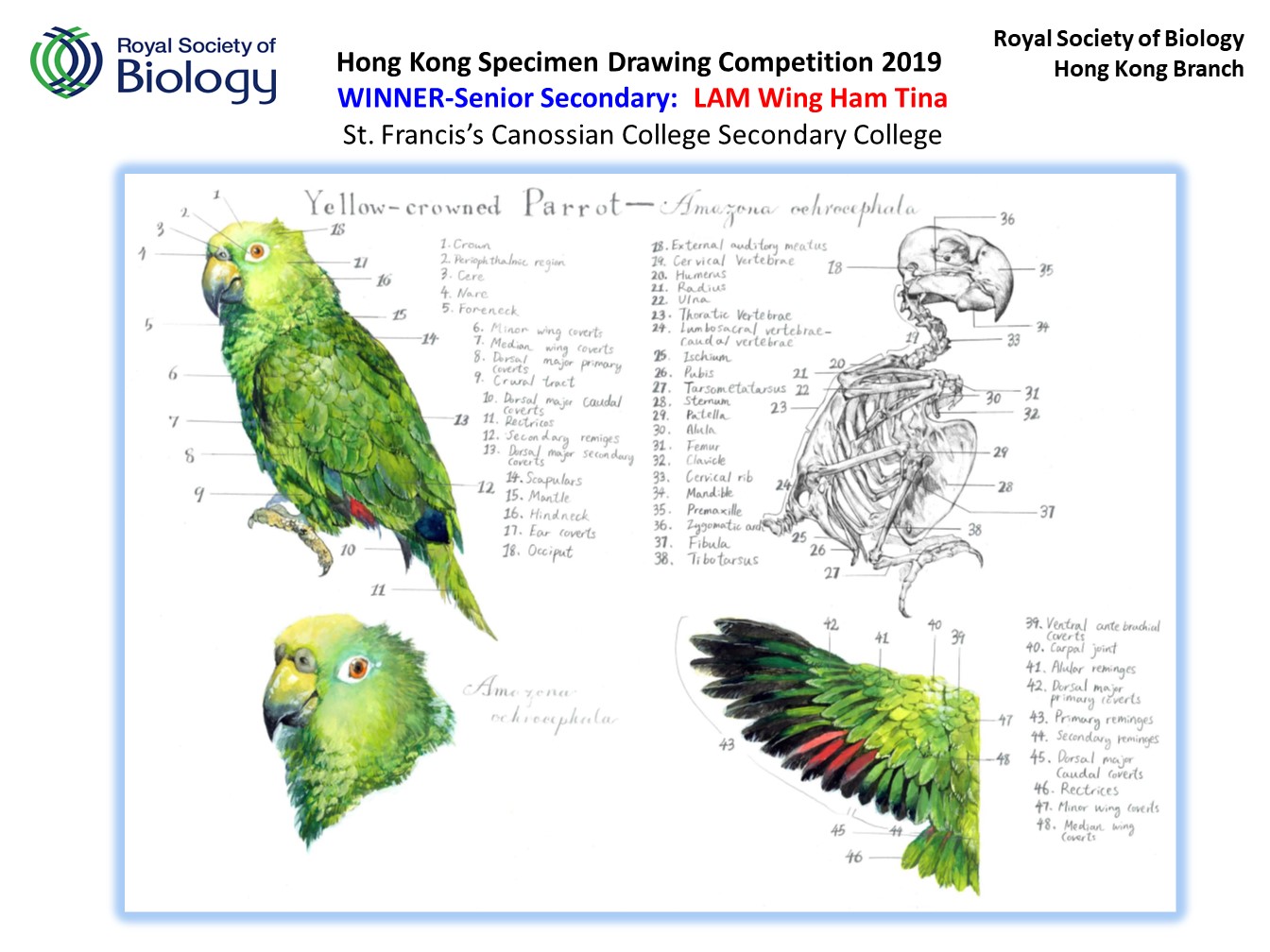 We would like to express our gratitude to our three adjudicators: Professor Gordon Maxwell FRSB from the Open University of Hong Kong; Dr Anthony James from the Wimmera Mallee Veterinary Services, Australia; and Mr Tse Sik-Yan FRSB the Chairman of the branch. It was really a difficult task to decide on the winners among so many excellent drawings.

Due to the social distancing rules implemented in Hong Kong, we were unable to hold our prize ceremony, so we posted the certificates and prizes to the participants’ schools. We are grateful that even though schools were closed due to COVID-19 preventive measures, we still received 82 entries from primary schools and 98 from secondary schools. We hope that even more students will take up the challenge and enter in our next competition.

We enjoyed a wonderful field trip to Tap Mun, also known as “Grass Island”, which is located some 1.6 km offshore from the Wong Shek peer in Sai Kung East Country Park.

Professor Gordon Maxwell FRSB was an excellent guide, he pointed out interesting features of the island ecology’s while highlighting the eco-dynamics of the feral cattle as herbivores as they interact with the emergent shrub land and a grassland currently dominated by one species, Carpet grass. It was exciting to observe the regeneration of the secondary forest ecosystem. 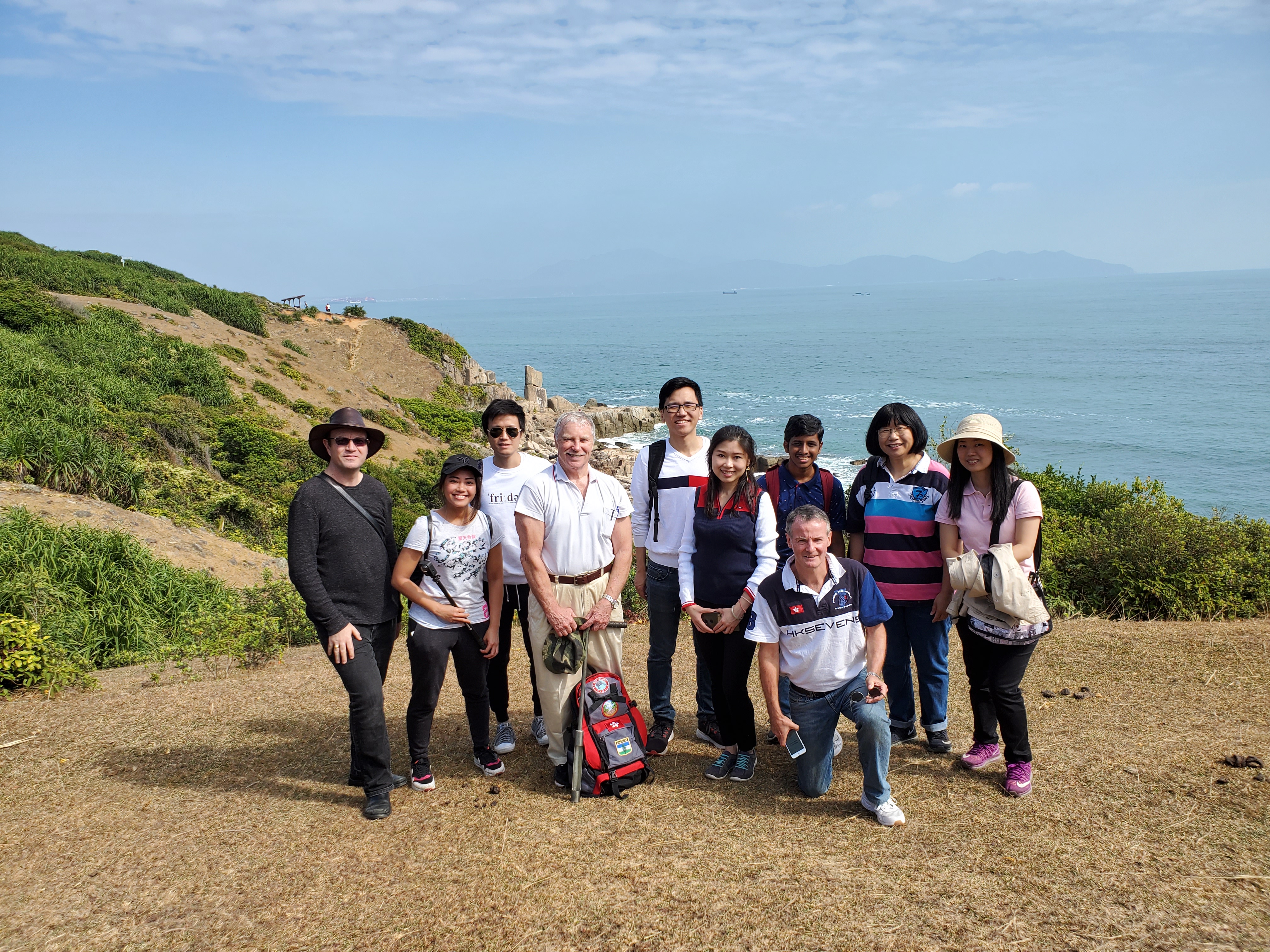 We all enjoyed the easy hike around the beautiful island. The delicious seafood lunch was a perfect end to a wonderful day. The field trip was a great way for members of the Hong Kong branch to get to know each other while spending time in nature.

Except for the three winners, 14 Outstanding awards, 37 Highly Commended awards and 74 Certificates of Merit were awarded. We hope that all entrants have deepened their love for nature through their participation in our competition. 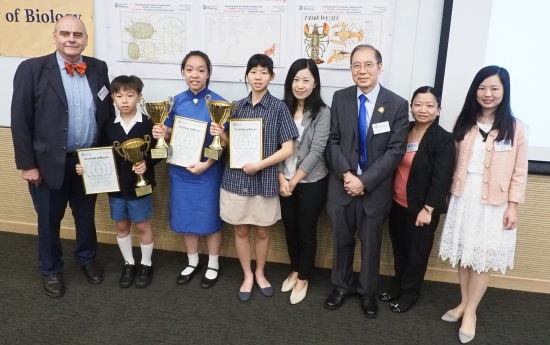 Photos of the event as well as the winning and outstanding drawings were posted to Facebook.

We would like to express our gratitude to our three adjudicators: Dr. Valerie Yip from the Faculty of Education at The University of Hong Kong, Professor Gordon Maxwell FRSB from the School of Science and Technology at the Open University of Hong Kong and Mr Tse Sik-Yan FRSB the Chairman of the Royal Society of Biology Hong Kong branch. It was really a difficult task to decide on the winners among so many excellent drawings.

We want to give our sincere thanks to our Guests of Honour: Professor Alice Wong, the associate dean (teaching and learning) of the Faculty of Sciences at the University of Hong Kong and Dr. Anthony James, the Director of the Animal and Plant Care Facility at the Hong Kong University of Science and Technology. They really motivated everyone present to be more curious and to study nature with their inspiring words.

We also want to thank the University of Hong Kong for providing the venue as well as Mr Leo Lui of the Mathematical Corporation (HK) Limited and Mr Tse Sik Yan FRSB for sponsorship.

The chair, Mr Tse Sik-Yan FRSB, opened the meeting and welcomed everyone. He gave a short introduction of the history of the Hong Kong branch and thanked outgoing officers, honorary treasurer Yuet Kan Liu MRSB and honorary secretary Li Tian MRSB, for their dedication and hard work during the past year. 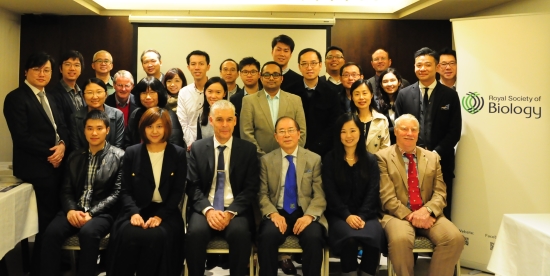 The vice chair, Stella Sze Wa Chan MRSB, reported on the second Hong Kong Specimen Drawing competition. The competition was well received with 91 entries from 29 schools. Stella then introduced the third Hong Kong Specimen Drawing competition, which is currently open for entries. She also informed the assembly that entries would be collected electronically through a new online application system.

The honorary treasurer, Yuet Kan, then gave the financial report of the Hong Kong branch and it was accepted by the assembly. New members and officers for the 2018-2019 executive committee have been elected:

With no other business, the Chair closed the meeting at 19:45 and invited our honourable guest Professor Matthew Evans FRSB to give a talk on the topic “Climate Change: Impacts on our Environment.” The enlightening talk was followed by a question and answer session.

What better way to celebrate Biology Week than to get out in nature to appreciate local biodiversity? We did just that, inviting the general public to join us on a field trip, with DIY BIO Hong Kong introducing their ‘Bug Hunt’ challenge to the participants. 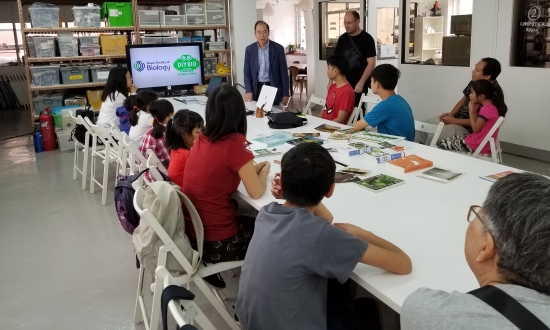 DIYBIO Hong Kong is a group of citizen scientists and the objectives of the Bug Hunt are to instill a respect for the wonders of life and living things through scientific investigation, art and design. As part of the challenge participants of all ages are invited to learn more about Hong Hong's rich biodiversity by undertaking a creative project or scientific investigation in one or more of six tracks: Bug Photography or Film; Bug Art, Design or Fashion; Bug Pets or Breeding; Bug Ecology; Bug Taxonomy; or Bug DNA Barcoding.

The Bug Hunt will come to a climax with the Bug Fest, a whole day festival where participants will share their projects and scientific investigations with each other and the general public.

After the Bug Hunt session we set out on our field trip trying our best to spot as many insects as possible. We also collected a few insect specimens by hand, as, according to the laws of the Hong Kong administration, one is not allowed to collect any animals with the use of any hunting apparatus.

After returning from the field trip we used different books about the insects of Hong Kong to identify the specimens we collected. These specimens were then deposited in the Bug Hunt Hong Kong collection. Everyone who attended really got to appreciate Hong Kong’s rich insect biodiversity and had fun trying to spot different insects in nature.

The Hong Kong branch launched its first ever Specimen Drawing Competition in September/October 2016. Student entries were invited from over a hundred primary and secondary schools in Hong Kong. The response was very promising with over 110 student entries coming from 24 schools.

The results were announced in March and a prize presentation ceremony was held in May at the University of Hong Kong, with Professor Matthew Evans FRSB, dean of the Faculty of Science, invited as the Guest of Honour. 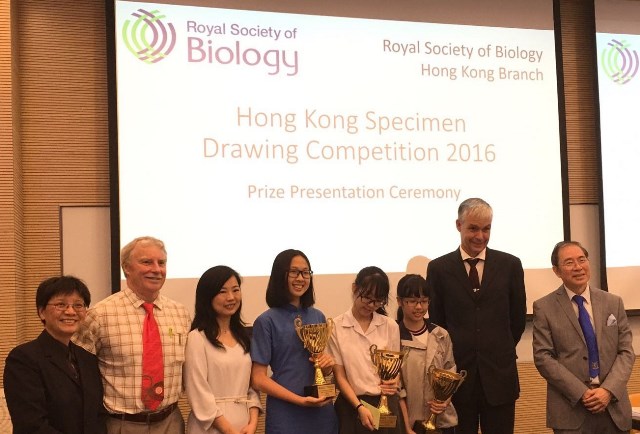 During the Ceremony Professor Evans praised the remarkable performance of the students and samples of the awarding entries were shown and commented upon by the two adjudicators, Professor Gordon Maxwell FRSB and Dr Helen Law. Vice-chair Dr Stella Chan MRSB gave a vote of thanks and presented souvenirs to the guest speakers. The ceremony was immediately followed by a guided tour of the University’s specimen museum led by Professor Benoit Guenard of the School of Biological Sciences.

In total over 40 primary pupils from six primary schools were invited to take part in the event. 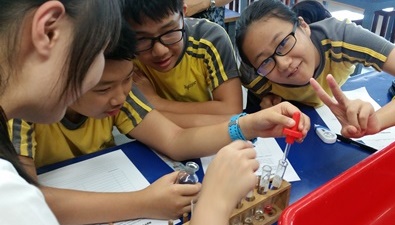 The Gopher Science Lab was a great success and all the children loved it.The secondary school students learned a lot about science and improved their communication and leadership skills.

Mr Sik-Yan Tse, chairman of the Hong Kong branch, and vice chair Dr Chan presented certificates to the participants. Thanks to Dr Gert Grobler who presided over the project, which we hope to expand next year by involving more secondary and primary schools.

Professor Gordon Maxwell FRSB and Dr Stella Chan MRSB led a group of 18 high school students, aged 15-16, for a visit to the Environmental Laboratory at the Open University of Hong Kong.

The guided tour, which involved hands-on experience with laboratory equipment and time with laboratory technicians, helped the students widen their horizons and gain invaluable scientific knowledge. They were shown how to develop solutions to pollution problems like wastewater and food waste filtrate treatments using their existing knowledge of biological science. This practical experience enabled them to appreciate how applications of science and technology can help solve many global environmental issues. 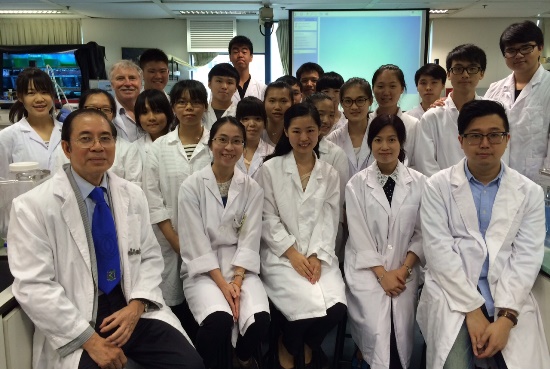 After the visit, the branch hosted a Chinese dim sum lunch during which Hong Kong branch chairman, Sik-Yan Tse FRSB convened some face to face discussions and interflow of ideas between the students, research project leaders, teachers and laboratory administrators.

Held at the United Services Recreation Club, 28 members, Fellows, family and friends attended the Hong Kong branch inauguration ceremony. Guests met for an eco-tour of the century old club followed by a poolside barbecue. Chair Sik Yan Tse CBiol FSB welcomed all attending the meeting, where the future direction of the branch was discussed.