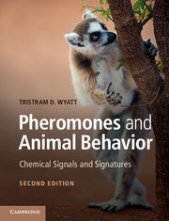 Fifty-five years ago, Adolf Butenandt extracted and identified the sex pheromone bombykol from some 500,000 female silk moths. Identifying such chemical signals – which typically trigger innate responses from an animal of the same species receiving the signal – wasn't easy.

Today, advances in chemistry –particularly in chromatography and mass spectrometry – allow the characterisation of pheromones from minute quantities of tissue. As Wyatt explains, this has enabled scientists to make spectacular advances in understanding the role that pheromones, as well as other types of signalling chemicals, play in animal behaviour.

The first chapter discusses and defines various semiochemicals, including pheromones, involved in interactions between organisms. Further chapters deal with methods for studying semiochemicals, their roles in sexual behaviour, aggregation, territoriality, social organisation, alarm and orientation, and on how pheromones in particular affect sensory receptors and brain circuits.

Pheromones bring benefits, but there can be drawbacks. If a female moth produces a pheromone to attract a mate, another species may use this as a cue for other purposes – for example, to prey on the female or her eggs – as described in the chapter on illicit signallers and receivers of semiochemicals. The final chapter argues that it has yet to be demonstrated that there are pheromones in humans, but leaves the distinct impression that we shouldn't be surprised if they are found. This is a splendid book that will appeal to a wide audience.

Best Postgraduate Textbook in the Society of Biology Book Awards 2014