Six parties debate at Science and the General Election

Representatives from six of the UK’s main political parties clashed today over how immigration, tuition fees and fiscal policy were affecting science in a unique pre-election debate organised by the Society of Biology on behalf of the science and engineering community. 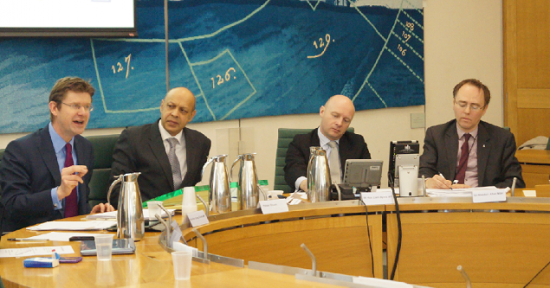 Labour Shadow Minister Liam Byrne said the UK university system was ‘going bust’ as three quarters of students could not afford to pay back their student loans. He said that Conservative plans to cut a further £55bn from public spending would be ‘disastrous’ for science.

Byrne said increasing research and development spending to 3% of GDP would be a ‘good ambition’ for the UK, while Dr Julian Huppert said the Liberal Democrats would ring-fence the current science budget at 3% above inflation for the next 15 years to provide long term stability.

But Conservative MP and Science Minister Greg Clark said the science budget would always be dependent on the UK’s economic performance and it was not realistic to make spending promises that far ahead.

“We have committed to a capital budget that is rising above inflation over the next parliament. When it comes to a spending review that all our parties would have to do following an election, I think you can see the demeanour of our party when it comes to science” said Clark.

Science and the General Election, chaired by the BBC science correspondent Pallab Ghosh, is the only science debate being held in the House of Commons prior to the general election.

Representatives from the science community were given the opportunity to question spokespeople from the Conservatives, Labour, Liberal Democrats, SNP, Plaid Cymru and UKIP.

The discussion repeatedly returned to wider government policies that affect the amount of funding and people coming to the UK science sector. Opposition MPs said the Government’s immigration cap and the scrapping of post-study work visas had harmed foreign scientists’ perception of studying in the UK.

UKIP MEP Dr Julia Reid suggested that a points-based system of immigration would be fairer and wouldn’t prevent STEMM (science, technology, engineering, medicine & maths) students coming to the UK to work and study.

She said, “Because we have so many people coming from the EU, who have a right to live and work here, the only way the Government can limit the numbers coming here is to discriminate against those coming from the rest of the world.”  She also revealed that UKIP believe that tuition fees should be waived for the UK’s STEMM students.

A full report on the Society’s parliamentary hustings and an exclusive interview with Science Minister Greg Clark will appear in the next issue of The Biologist.