A New History of Life 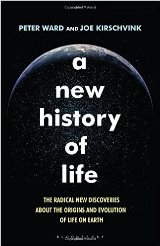 Following venerable Darwinian beliefs, a common assumption (including that of biologists) is that life first emerged from a rich primeval soup and gradually evolved in a uniform manner.

With forensic precision, the authors of A New History of Life shatter that view in a startling account of the quite different picture emerging from the combined results of astrobiology, geobiology and novel instrumentation.

They argue that scientists must radically reassess long-held assumptions for a range of reasons, including catastrophic events such as those caused by asteroids colliding with the Earth; challenges to the thesis that carbon-based reactions were paramount to early life from evidence that quite different chemicals (notably H2S) were crucial to the earliest living organisms; and, finally, the evident evolutionary importance of ecosystems, rather than species.

The authors pose questions about what is really meant by the concept of 'life', describing evidence that fossil microbes living 3–4 million years ago needed sulphur, but were poisoned by oxygen; that early organisms survived at temperatures close to boiling water; and that exposing mammals to H2S induces a state of suspended animation coupled with ectothermia. And while it remains impossible to answer that question definitively, the book is a fertile source of ideas for those with metaphysical inclinations.

The seemingly plausible thesis is that life originated on Mars, reached Earth via asteroids and only then, after surmounting several hurdles, found that nutritious soup to which we can remain attached. It's a stimulating read, but would have benefited from better illustrations.