From Quarks to Culture: How we came to be 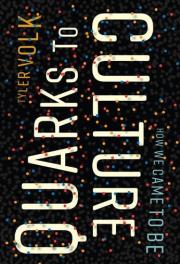 In this ambitious book, biologist Tyler Volk attempts to describe the rich world around us in terms of an increasingly complex hierarchy of systems.

For example, soon after the big bang, fundamental subatomic particles combined to create atoms, which had an entirely new set of properties that allowed them to form molecules. Molecules themselves then have an even greater range of properties and the potential to form a more complex system.

Volk takes the reader through what he calls "the grand sequence": 12 fundamental systems that are only possible because of the properties of the systems of which they are made up.

We go from the mysterious fundamental quanta and how they form protons and neutrons, to atomic nuclei, atoms and molecules. Molecules then form metabolising cells, and the combination of bacterial and archaeal cells form eukaryotic cells, which allow the creation of the multicellular organism. Volk's next level up is animal social groups, then tribal metagroups, up to agrovillages and, finally, geopolitical states.

Ironically, for a book aiming to explain the entirety of 'quarks to culture', Volk's theory of combogenesis is little more than the observation that at each level of complexity we find innovations that are necessary for the next. The idea is not hard to grasp, and its re-emphasis with each level described becomes repetitive.

However, the book is thrilling for its attempt to piece together the puzzle of how we came to be, from the creation of the universe to the advanced human societies we live in today. With the exception of two missing pieces – what created the properties of fundamental particles and how molecules became cells – this is as close as a book gets to an instruction manual for our world.