Life in the Dark: Illuminating biodiversity in the shadowy haunts of planet earth 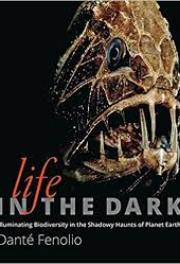 Danté Fenolio is a biologist and a superlative photographer who has travelled the world capturing amazingly beautiful images. The theme running through this collection of photographs is the biodiversity of life in dark places. The book includes chapters on life in the deep sea, dark freshwater habitats, subterranean life and species conservation in general.

The book is well referenced, with recent literature quoted or referenced to back up the brief scientific explanations accompanying each photograph. Many point to further reading for those who want to gain more in-depth knowledge about the species featured in the book.

I liked the captivating anecdotes from the moments when photographs were taken on a research vessel trawling for new species in the ocean depths. Because the photographs were part of a scientific process, there are precise details of depth and location of each species. On a number of trawls, so many animals were collected that Fenolio had only just finished photographing one lot when the net returned to the deck from another trawl.

The main message to take away from this beautiful book is that there is so much biodiversity on Earth, but we need to protect this diversity to prevent its loss before we understand what is lost. It ends with a call to support conservation efforts by doing whatever we can to support habitat and species diversity.