The bioscience community has been using new tools and platforms to quickly share and critique data and research during the COVID-19 pandemic. Is it an opportunity for radical new models and platforms to emerge? Dr Alexandra Freeman explains the concept behind a new multi-format publishing system known as Octopus.

It’s a truth universally acknowledged that the scientific publishing system is in need of reform. Researchers, institutions, funders, even publishers: all are struggling with the current system and the coronavirus pandemic has thrown that into even sharper focus. Papers just aren’t appropriate any more for sharing scientific research and ideas. Why not? One reason is that we’re using the concept of a published paper to do too many things at once.

Clearly, the same style and format does not suit all three of these uses. In fact, the consequences of attempting to rely on a single format for them all is at the heart of many of the problems we see in science today.

The primary record of research – the bit that records in detail what has been thought and done, by whom and when – is the vital backbone of science and the bit that has been shown to be most lacking in the current crisis. We all work on tiny pieces within the huge puzzle of human knowledge, building on what others have done; we collect our small amounts of data; we work with others who can lend their different experience and expertise to our projects. When mistakes are made, the record is supposed to ‘self correct’ before too much more is built on those foundations. We need sharing of ideas, experience and data quickly and in full in order to piece together the jigsaw in a timely and efficient way.

However, the current scientific publishing system is far better designed for announcing new findings or giving editorialised reviews of topics for specific professional readerships. Legacy limits on length, figures and format act against papers fulfilling the role of the primary research record. The format also requires a complete ‘story’ – taking the reader through a journey from theory to the evidence supporting it. This, as all fields have witnessed, tends to increase the pressures that lead to ‘questionable research practices’ – i.e. ways of helping the evidence support a theory. And using papers as a measure of professional achievement adds to this pressure, leading to a toxic research culture.

The solution, then, is surely to separate the primary research record from the realm of papers and journals.

About two years ago I started talking about my idea for a new primary research record: Octopus. It puts aside the format of a paper in favour of a chain of eight smaller publications types (from a publication defining a scientific problem, via publications for methods and results and analysis, right through to publications that describe real-world implications and, finally, a peer review). Each of these publications must be linked to each other to form branching chains, but they don’t have to be authored by the same person and they can be published sequentially – and re-versioned.

While anyone can read what’s published in Octopus, only those logged in with an ORCiD will be able to publish. Rather than slow and expensive professional typesetting and its costs, authors have control over the appearance of their articles: they choose the format that best conveys their work clearly. Much like pre-print soon as something is published, it will be available for open and transparent review and rating. Just what we need in the current crisis – and at any time.

Because reviews are treated just like any other kind of original publication in Octopus – they will appear in their authors’ publication list and can be rated by others, and good reviewing will be incentivised. All publications (including reviews) can be rated by logged-in users on pre-defined criteria, chosen to represent ‘good practice’ for each publication type. 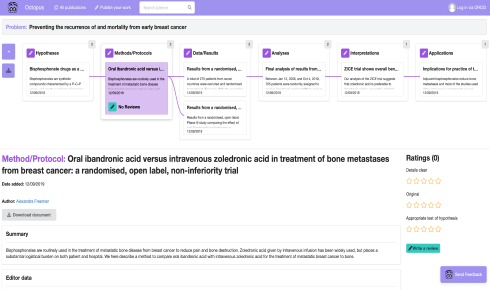 A screengrab from a test version of Octopus, showing the eight publication types or stages that form a chain of scientific inquiry and outputs.

The ratings mean that poor publications can be easily identified (and de-prioritised in searching), and being able to read the reviews of others will help everyone critique others’ work. Any logged-in user of Octopus who has concerns about misconduct, plagiarism or inappropriate use of statistics in a publication can raise a ‘red flag’ on it and their views will be visible to other readers.

Together, all these features mean that good work of all kinds, and not just good story-telling, will be rewarded in Octopus. People will be encouraged to share every aspect of their work quickly and in full, and to critique others’ in a collaborative way. This new primary record of what everyone has thought, done and found will allow us all to progress faster and will be more meritocratic.

Every researcher will have their own page showing what types of publications they have written, and how well they have been received by their peers – a useful resource for institutions and funders.

Last year I pitched the concept of Octopus in a contest at the Royal Society – and won. I was handed the award by Magdalena Skipper, the Editor in Chief at Nature. A couple of months later, I was given a mini grant by Mozilla, and invited to form a partnership with the UK Reproducibility Network. These awards, plus a donation from an anonymous philanthropist, allowed me to employ designers and software engineers to work alongside the growing band of volunteers who were keen to help make Octopus a reality.

With many of the major costs of the current publication system (such as editorialising, marketing, typesetting etc.) removed or minimised, maintenance of the system should be a drop in the ocean compared with the billions we currently spend and I expect to be able to raise the relatively small amount needed from traditional funders and academic institutions.

Now the technical work is almost done – Octopus is a working platform on the brink of release. But few have doubted that Octopus could be built – what people doubt is that researchers can be prised away from the idea of considering papers as the be-all and end-all of their research output.

I’m more hopeful. Not only can Octopus exist alongside traditional paper-publishing for as long as it takes, just as pre-print servers do, I believe that it fulfils a desperately-needed role in science. Journals can repurpose themselves as the source of well-written, editorialised content, delivering timely and focussed science news and reviews to their different readerships, Octopus can take on the role of primary research record – establishing priority for ideas, and being the place where ideas and work of all kinds is rapidly published and openly critiqued. It will not be a ‘good read’, but it will be a detailed record of scientific work as it occurs around the world. And, because it is digital-first and uses automatic language translation, it will be as Open and accessible to all researchers as possible, as well as being easily searchable and navigable.

A site that uses all the tools of the 21st century to help researchers find out what has been thought and tried, to what effect, in any area of science easily… and which allows researchers to add their own work to it, easily… and which allows anyone to see exactly what any individual researcher has done, and how well, easily... That is something that science, and scientists, desperately need. And that’s a truth that I think is now, in the light of COVID-19, being universally acknowledged.

Dr Alexandra Freeman is executive director of the Winton Centre for Risk & Evidence Communication at the University of Cambridge.

You can view and test a version of the Octopus platform at: https://demo.science-octopus.org. Developers welcome comments and feedback through the ‘feedback’ link in the footer on the site or via this form.