The Least Likely Man: Marshall Nirenberg and the Discovery of the Genetic Code 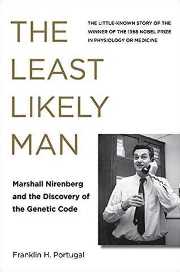 The achievement of James Watson and Francis Crick in determining the double helix structure of DNA is writ large in the annals of biology. Indeed, their names have transcended science to enter popular culture in the same way that, also in 1953, Tenzing and Hillary's ascent of Everest captured the public imagination. Both feats are recognised as firsts in their fields.

The big follow-up discovery regarding the 'molecule of life' was how DNA directs the expression of proteins. The genetic code was cracked in the early 1960s by an altogether less-lauded figure, Marshall Nirenberg, who, despite the fact that his discovery had massive impact on our understanding of molecular biology, has become something of a footnote in history.

Nirenberg was an experimental biochemist working at the US National Institutes of Health who was far removed from the members of the so-called 'RNA Tie Club' who set out to decipher the Holy Grail of the genetic code: linking nucleic acids to amino acids.

Still, applying unswerving practical rigour harnessed to brilliant insight, this humble staff scientist beat the select group of theoretical biologists, chemists and physicists to solve this key question. Author Franklin Portugal was a junior colleague of Nirenberg's at the time, so offers an inside view of both the laboratory research and the individual who directed the work.

What we get is a portrait of a self-effacing, methodical yet ingenious man who did not court publicity for the discovery, but instead soon changed fields to neurobiology. A highly recommended biography.