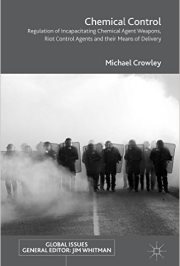 The past is replete with examples of scientific and technological advances leading to the development of dangerous new weapon systems, and efforts at disarmament and arms control following along behind.

Thus the industrialisation of chemistry at the end of the 19th century enabled the development, deployment and use of lethal chemical weapons in the First World War.

The 1925 Geneva Protocol banned their use, but it was not until 1997 that the Chemical Weapons Convention led to the destruction of almost all such weapons.

We have been luckier with biological weapons because, while many states developed them, their use was limited. But how long can the 1975 Biological and Toxin Weapons Convention restrain the further development of such weapons? And what can biologists do to help prevent misuse of their work?
In Chemical Control, Michael Crowley sets out a three-stage holistic approach to arms control, and illustrates it by applying it to the regulation of incapacitating chemical agents and riot control agents and their means of delivery. Significantly, stage one of the process is an examination of the weapons technology and the impact of advances in science on these weapon systems. Stage two assesses the current means of regulation, and stage three considers what else needs to be done to establish an integrated means of control.

Here is a strategy in which biologists can apply their expertise and, as the book demonstrates, it has a good chance of working.