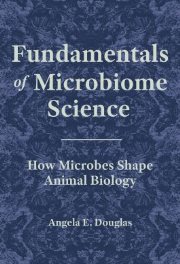 The first use of the term ‘microbiome’ was by John Whipps, Karen Lewis and Rod Cooke in 1998 as a convenient ecological framework for the use of fungi in biological control systems. It was defined as a characteristic microbial community occupying a reasonably well-defined habitat that has distinct physico-chemical properties.

More recently, microbiomes have twice been Science journal’s breakthrough of the year (2011 and 2013) and I was pleased to be at the launch of a US interdisciplinary National Microbiome Initiative in Washington DC in 2016. Here, Angela Douglas has embraced the concept and applied it to the description of the microbiomes of animals. A major focus is at the symbiotic level, in line with her previous books.

Resident microbes in healthy animals, including humans, can determine traits of the animal host. One such practical example of this is the use of faecal microbiota transplantation from healthy humans to treat the gut of patients who are infected with bacteria such as Clostridium difficile. There seems to be great opportunities for medical science in this arena and some studies have now explained this at the molecular level although this is not covered in Fundamentals of Microbiome Science.

Other practical opportunities with the use of the microbiome are in pest control. The coverage of habitats by Douglas is extensive, and includes such diverse habitats as reef corals and hibernating mammals. The approach is at the conceptual level and as such is thought-provoking for both students and researchers alike.