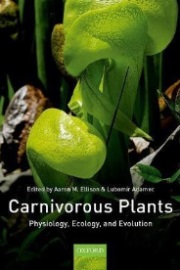 The last major academic book on carnivorous plants was in 1989, so it is high time for an up-to-date text reflecting the use of modern techniques such as genome analysis and tissue culture.

This is a monumental piece of work with more than 50 authors contributing to the text – there are 1,600 references listed in the bibliography!

To date, some 800 species have been described in 10 different lineages, and molecular systematics has shown that carnivory has evolved independently at least 10 times.

The anatomy and physiology of each type of plant is explored in detail, with descriptions of trapping mechanisms, extrafloral nectaries and other prey attractants. Knowledge of the biochemistry of carnivorous plants – for example, the stickiness of the glues found in sundew and the slippery nature of the peristomes of pitcher plants – is proving useful in several fields.

The conservation status of some species is still poorly documented and many have not been assessed for protection within the Red List of the IUCN.

Carnivorous plants are at risk from disease, pollution and weed infestation, as well as the usual threats of illegal collection from the wild and habitat destruction as seen with some orchids and cacti. The public is often surprised by conservation threats to species that are seen to be common and easily obtainable from nurseries and garden centres, such as the Venus fly trap.

While this book is clearly intended for plant biologists, there is plenty here for horticulturalists and enthusiasts too.