Future sea: How to rescue and protect the world’s oceans 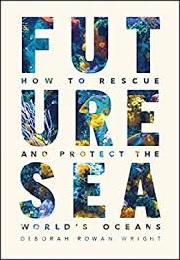 Since the dawn of the Industrial Revolution people have been, and will continue to be, the nemesis of the health, biodiversity and longevity of our seas and oceans. The time of writing of this fine book coincides with a swell of public interest into the effects that man-made pollution, over fishing and practices such as shark finning and the resumption of commercial whaling is having on the health of our marine environments and, by extrapolation, the planet.

Wright’s book emits passion and fire coupled with a growing urgency to “put things right” - to make good our failings to protect the life of seas and oceans. Wright highlights good practice and encourages its dissemination and adaptation where possible, whilst castigating politicians for ignoring the science and aligning themselves with those who would exploit our seas to the point at which they become lifeless.

I particularly enjoyed chapter nine - 'The power of many small changes' in which Wright discusses the negative effects of people’s actions on oceans and seas e.g. pollution, including noise from ships, burning of fossil fuels, and damage to fragile undersea habitats, as well as positive initiatives in the guise of greener technologies for ship design and operation - such as using the characteristics of the ocean’s natural character to generate clean renewable energy; and even ways for women in less-developed nations to achieve gender equality and assume more charge over birth control, resulting in fewer babies and a reduced food and resource consumption and ultimately, lower levels of pollution through consumer demand.

This book is simply too important not to be read by the general public, marine scientists, ecological / environmental conservationists, representatives of marine-based industries and especially politicians; and since most of it is jargon-free, there really is no excuse.