Race in a Bottle: The Story of BiDil and Racialized Medicine in a Post-Genomic Age 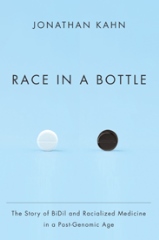 Lawyer Jonathan Kahn is a smart guy: he seems as much at home discussing epidemiology and drug marketing as he does the history of US race relations and the intricacies of patenting. In the magnificent Race in a Bottle, Kahn examines the way BiDil – the first drug approved in the USA with a race-specific indication – was constituted through a mixture of particular ideas about race and long-held assumptions about its biological underpinnings, a carefully targeted and worded patent application, and broader political concerns about access to medicines.

As Kahn shows, BiDil is not a bad drug; rather, the science that seeks to establish it as a better drug than pre-existing alternatives is shaky. Further, he does not argue that medicine – perhaps especially in the USA – should be 'colour blind'. What he does clearly evidence, however, is that BiDil would work in many people who are not black, and would fail to work in some people who were. He makes strikingly clear the great disjuncture between race in medicine and the far more problematic racialised medicine.

In the latter case, heath disparities become recast as differences, grounded in genetics – even when the evidence may be pointing far more obviously towards socio-economic than biological factors in producing these. Recasting disparity as difference, therefore, has political, clinical and scientific implications, as funds are directed away from social policy initiatives that seek to combat social inequalities, and to the development of drugs that may be far less effective in reducing differences in propensity and mortality of disease.