An Order of Magnitude

Erica McAlister is senior curator of Diptera at the Natural History Museum (NHM) and published her first book, The Secret Life of Flies, in 2017.

Within a few minutes of meeting her it’s clear that I will have to abandon the regular ‘Q&A’ format for writing up interviews in The Biologist. There are more than 2.5 million Diptera specimens in the NHM collections, and as we get coffee and wander around the museum she seems to have a story about each one of them.

“A lot of the time back then, they were preserved in books, so the colour still looks fabulous,” she says happily. “Flies don’t contain much lipid, so they don’t deteriorate as much as other specimens. Although they are bit squashed, we can still obtain DNA from them.”

McAlister is on a mission to change people’s perception of flies as unhygienic, ugly nuisances. The Secret Life of Flies explores how Diptera is among the most successful and diverse groups of organisms on the planet; how they perform essential ecological functions such as nutrient recycling and pollination, and have evolved a truly amazing range of weird and wonderful life cycles and behaviours.

She shows me spider-killing flies, fungus gnats and a tiny chocolate midge, one of the few pollinators of the cocoa plant. No chocolate midge equals no US$100bn chocolate industry.

“The language we use with flies is so negative and we need to do more to tackle this. We don’t talk about butterflies annoying us like we do flies. And we would never say ‘all primates do this’ if one primate was really annoying or dangerous, but we do say it about hundreds of thousands of different flies.” 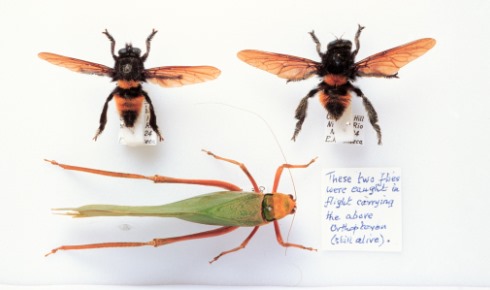 A robberfly, caught in flight holding two other flies as prey, from the NHM's Diptera collection

McAlister points out a botfly that lives in the stomach of rhinos. “We’re so vertebrate-centric that we don’t realise what’s really going on,” she says. “There are more species of fly in the UK than there are mammal species in the world, but look at the bias towards studying them.”

McAlister says it’s hard to define her role at the museum, as there is “no normal” for curators here. Her main responsibility is to maintain and enhance the biological heritage contained in the collection, but she also travels to provide expertise to research projects overseas, which are often focused on mosquitoes, one of her areas of research.

“A species of mosquito called Anopheles barbirostris was found to be spreading malaria on some Indonesian islands and not others, so I was asked to help find specimens from the original locality,” she explains. “The type specimen was from 1850 and like this (she does a good impression of a squashed fly), and when I found the type specimen, the locality said ‘VOLCANO, JAVA’. So I spent three weeks looking for this mosquito on the side of a volcano in Java.

“Eventually, molecular analysis found the one species was actually four – that’s why some were transmitting the disease and not others.”

Defining Diptera Diptera means 'two-winged' and all true flies have just one pair of wings. In most species the hindwings have instead formed sophisticated balancing organs known as halteres, which provide spatial feedback to the flight muscles.

A few times during our conversation, I assume McAlister is talking about a fly’s adult stage, and she reminds me of how most people, even biologists, tend to overlook the larval stage of flies.

“People are always trying to kill rat-tailed maggots, but they are really important decomposers and the adults (drone flies) are in the top six most important pollinators in the UK.”

By one extremely speculative estimate, included in The Secret Life of Flies, there are 17 million flies for every person on Earth. McAlister is unsure about these numbers, but believes the public underestimates how many flies there are, and their diversity, because so many Diptera mimic other species. “People will look at that one and think ‘wasp’, and that one and think ‘bee’.” She even shows me flies that look like spiders, including the incredibly rare Mormotomyia hirsuta, dubbed the ‘terrible hairy fly’.

Conservative estimates predict that there are over one million species of Diptera across the order’s 170 families. However, McAlister says dipterists have been “freaked out” by a recent Canadian paper that suggests that the true figure could be far, far higher.

“They found Diptera has been completely underestimated. It was the gall midges particularly – the authors extrapolated data from international collections and said there could be 1.8 million species just in that family.”

McAlister seems able to hone in on the specimen she wants to show me partly from memory, despite there being roughly seven thousand drawers of flies arranged in a vast room of identical grey cabinets. There are boxes of specimens piled up in the laboratories here that have been waiting 10 years to be inspected and catalogued. Around 125,000 species have been described, but with talk of there being millions more undiscovered species, I ask McAlister if she ever feels overwhelmed by the scale of the task.

“What’s really sad is that a lot of these species will be extinct by the time we describe them. We’ve given names to all these creatures, but we don’t know the biology. In some ways, we need to get this stuff done and go out there and start really understanding them.” 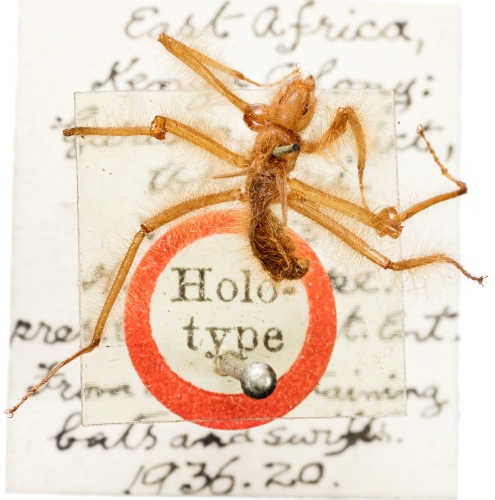 We are speaking just days before another landmark study on the decline of insect populations hits the headlines – this time claiming that insects could vanish altogether within a century.

Another key aspect of McAlister’s role is education work to help inspire the next generation of biologists and nature lovers, and she has been working with groups of schoolchildren on a species inventory on the Caribbean island of Dominica.

“The kids get to see a scientist in the field and can then see the specimens they found here in the collection. It’s generally a few years on, but when you can say ‘look, you caught a new species or created a new record for that island – or that it’s an important pollinator that we didn’t know before’ – they are getting to see real science. We’re enhancing and benefiting the collection and promoting a love of nature, which is definitely missing in secondary school pupils right now.” 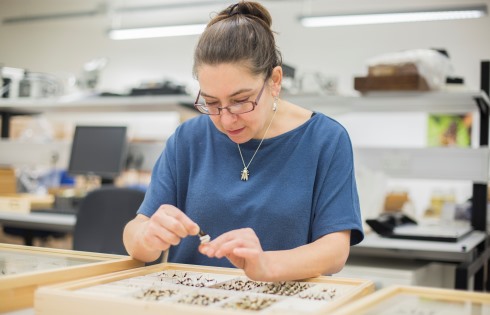 McAlister at work in the Natural History Museum's laboratories.

McAlister originally studied environmental biology at The University of Manchester. She says her brilliant tutors and a placement year with the Institute for Terrestrial Ecology (now the Centre for Environment and Hydrology) “brought the world alive” for her and is “entirely to blame” for her obsession with insects, flies and parasitism.

As an entomological ecologist, she felt the need to “return to the individual”, as she found herself “making huge generalisations about groups of organisms”. Even ecologists, she says, tend to group different types of Diptera together when looking at the biodiversity of an area, or even leave them out altogether because they are “too hard”.

“This really scares me when people make ecological assessments on that level. In flies, even if you’re talking about how many species of a given family there are, the bonkers-ness within that one family – the ecological and feeding diversity – will be huge. Phorids, for example, are the most ecologically diverse family of animal on the planet. And the juvenile stages of flies are are so important as decomposers and predators, whereas baby bees just sit there doing nothing.”

McAlister also says she worries about the future of species identification among the general public and biologists. “Yesterday’s Telegraph used a big image of a crane fly to accompany a story about mosquitoes. If people can’t recognise species, they might not be able to protect themselves from dangerous species or could be killing important pollinators.” 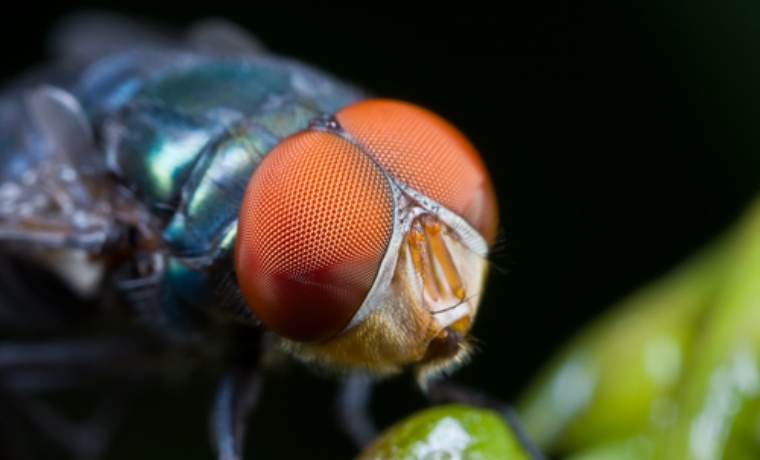 The amazing eyes of a blue bottle fly, Calliphora vomitoria

Has molecular taxonomy made biologists complacent in terms of morphological taxonomy skills? “I think we need both, and molecular taxonomists will agree. We might know an organism’s genome, but we don’t know the functions [these genes] are performing. Plus, you can have organisms with very similar genetic composition that look completely different. Flies are so plastic – if you were to just look at the Drosophila genetics, or just their morphology, you wouldn’t have a clue what’s going on.”

Alongside a museum-wide push to digitise all new specimens on arrival, McAlister hopes that molecular and computational work can help make the work of curators and collections managers more focused in future. In a project with the Wellcome Sanger Institute, for example, she is helping extract whole genome material from mosquito specimens going back 100 years.

“The next stage will be to look at what animal they are feeding on. Most of these are going to be biting birds. We may realise we’re spending an awful lot of money on things that don’t even bite humans. We’ve been trying to name species and understand their relationships for hundreds of years but still have many unanswered questions."

With the arrival of ever-more specimens, millions of undiscovered flies and major ecological collapses looming, McAlister has her work cut out. Thankfully, she appears to absolutely relish her job.“There’s these amazing bat flies – after copulating the female crawls on to a bat and then rips her own wings and legs off to get through its skin. She basically becomes a massive womb. How cool is that? “I love being able to sit down and watch these things happen, thinking: ‘I know what you’re doing!’ It fills me with awe.”