For Biology Week 2017, we invited the public to vote for their favourite UK tree species. We want to highlight the importance of trees in the UK and raise awareness of their conservation needs.

Trees play a huge role in our culture, economy and environment. They provide us with clean air, building materials, food and fuel, and are home to a wide range of wildlife, from insects to mammals. Our urban trees brighten up our cities, whilst our woodlands form a beautiful and relaxing environment.

However, our trees are at increasing risk from pests and disease.

Ash dieback, a fungal disease, has already killed ash trees across Europe, and threatens to cause huge damage in the UK, whilst oak trees also face decline. Other diseases, such as Phytophthora, can affect a wide range of different trees. Pests such as beetles and moths can also impact trees. Protecting our green spaces is vital if we want to preserve them for future generations.

The Horse Chestnut tree (Aesculus hippocastanum) was crowned the UK’s favourite tree species after winning a public poll of over 2,500 votes.

The tree, also known as the Conker tree, surged ahead of the other contenders, securing more than a quarter of all votes cast. 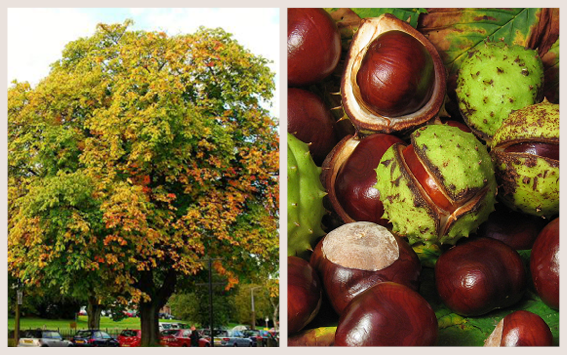 The Horse Chestnut was introduced to the UK and is a well-loved feature of parks, gardens and village greens. The tree is famous for its seeds, which are used in the game of conkers.

The Horse Chestnut beat 14 other trees to claim the title:

People voting were also asked why they thought trees were important, with many explaining they appreciated the importance trees play in providing oxygen to breathe, providing habits for other species and improving the aesthetic quality of outdoor spaces.

Protecting our trees is vital if we want our woodlands and green spaces to continue to thrive. There are lots of ways you can get involved in tree conservation: 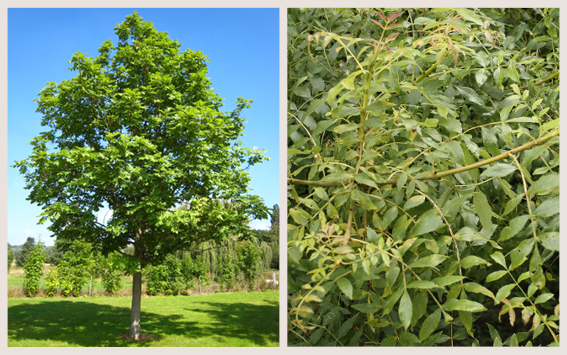 Found in locations across Europe, from the freezing Arctic Circle to the temperate climate of Turkey, the common ash tree is at risk of ash dieback. Ash dieback is a fungal disease that threatens to eliminate a huge proportion of the UK’s ash population.

With many birds, plants and animals depending on the ash tree for food and shelter, the decline in ash trees could have a shocking impact on the environment. 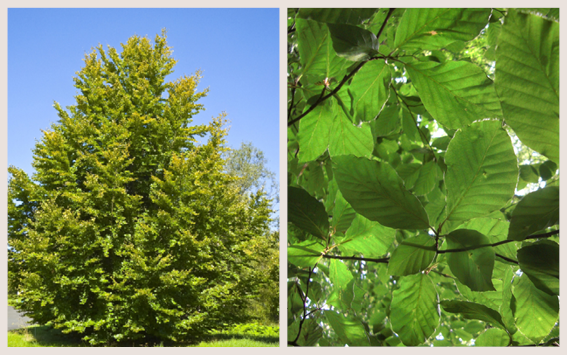 Did you know that the tallest native tree in Britain is believed to be a beech tree? Located in Newtimber Woods in West Sussex, the tree has been measured at a whopping 44m – that’s the height of 10 double decker buses!

The tall and broad beech tree forms a dense canopy, preventing many woodland plants from growing beneath it. Beech is particularly susceptible to bark stripping by grey squirrels, and can also be affected by fungal pathogens. Beech is frequently used to create furniture. 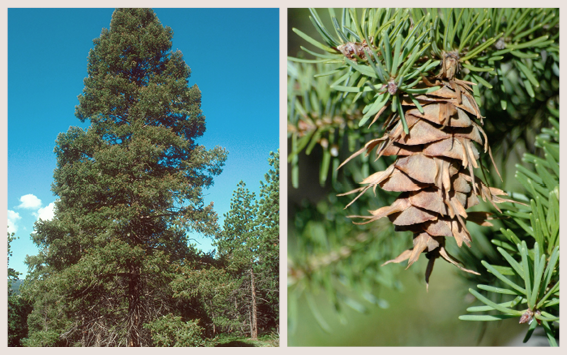 The Douglas Fir was introduced to the UK in 1827 by botanist David Douglas, from whom the tree gets its name. This evergreen tree can grow to 55m and live for over 1000 years. The Douglas Fir is strong and durable, making it a good choice for many commercial uses – the timber is used in construction work, and is commonly used for decking and flooring.

As well as its commercial uses, the Douglas Fir is also used as a Christmas tree – its good needle retention and citrus fragrance making it very popular. 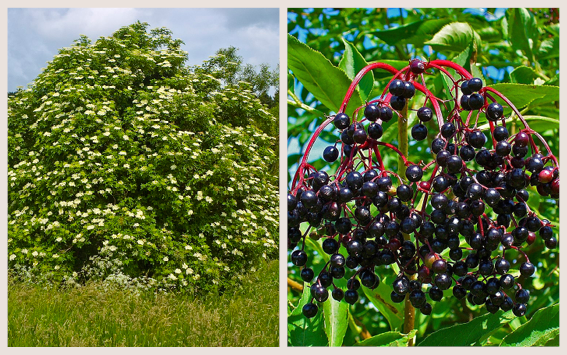 Found across the UK and in much of Europe, the elder tree is easily recognised by its short trunk and small cream flowers that bloom in spring and summer. The elder tree has a variety of uses – the flowers are used to create cordials and teas, whilst the berries can be used to make jams. Small mammals such as dormice and bank voles also take advantage of the berries.

This tree even has a magical connection – the Elder wand in Harry Potter was created from the wood of the Elder tree! 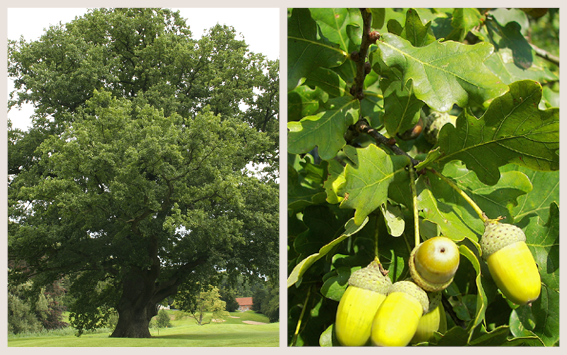 The English Oak is an iconic British tree, and can be found throughout the British Isles. Oak trees play an important role in British folklore and history, and have long been admired as a symbol of strength and survival. They produce acorns, providing an important source of food for birds and mammals, including jays, squirrels and deer. English oak trees face the risk of oak decline, which can lead to the death of the tree. 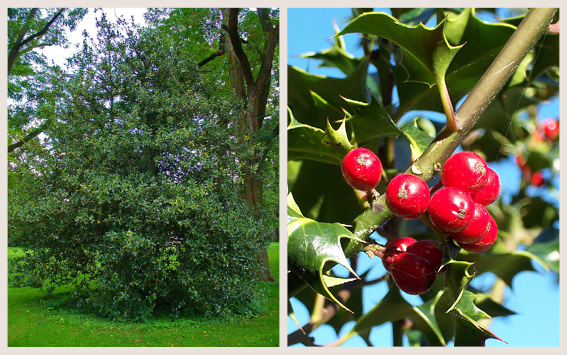 Holly is an evergreen shrub, easily recognised by its glossy spiked leaves and bright red berries. Though poisonous to humans, these distinctive berries provide a vital food source for birds and small mammals. Branches of holly are famously used to create wreaths to decorate homes during Christmas. Holly can be affected by holly leaf blight, which has become increasingly common over the last 10 years and has the potential to lead to dieback.

The Horse Chestnut tree, also known as the Conker Tree, was first introduced to the UK in the 16th century, and has since become a well-known feature of parks, gardens and village greens. The seeds of the tree, more commonly known as conkers, have traditionally been used to play the game of conkers, where the conker is tied to a string and opponents take turns striking the other’s conker until one breaks. However, this tradition could be threatened by the Cameraria ohridella moth, which can cause significant damage to the tree. 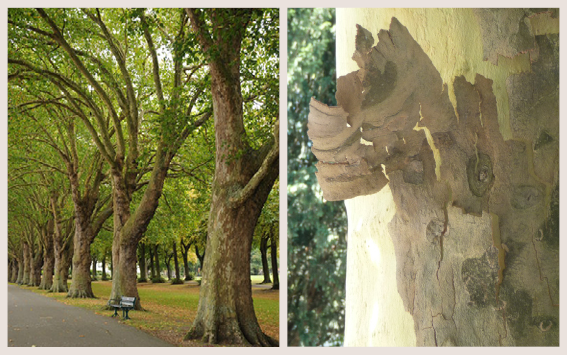 The London Plane is a common tree in cities, accounting for over half of London's tree population. It is non-native, and was introduced to the UK from Spain in the 17th century.  Often found growing on streets and city parks, it can cope well with pollution and compacted soils, making it ideal for urban life. The London Plane can live for several hundred years and grow to over 35 metres high. One of the most striking features of the London Plane is its bark, which peels off to form a patchwork of green and grey, resembling camouflage. 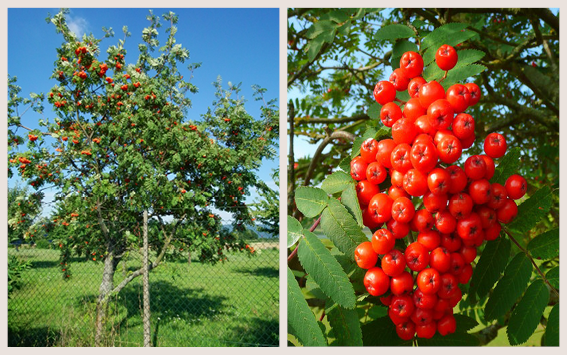 Also commonly known as mountain ash due to its capacity to grow at high altitudes, rowan is found across the northern hemisphere, with UK populations favouring the cooler climates of the north and west. The bright red berries that ripen in late summer are eaten by a huge variety of birds, from chaffinches to fieldfares, and the bark of the rowan tree also provides a good habitat for lichens and fungi. 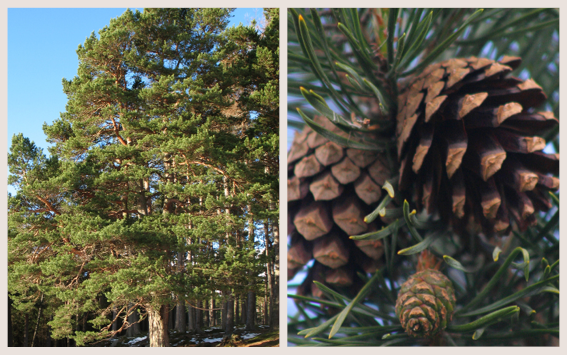 One of just three conifers native to the UK, the Scots Pine is found across the UK and in abundance in the Scottish Highlands. It can grow up to 36 metres tall and live for over 300 years. Commonly planted in heathland, it is widely used for its timber - Scots Pine is one of the strongest softwoods available, and is used in construction, joinery and fencing. This Pine is a great habitat for wildlife – birds such as the Siskin and Great Spotted Woodpecker can be found feeding around the tree, whilst birds of prey such as the Osprey and Goshawk use it for nesting. 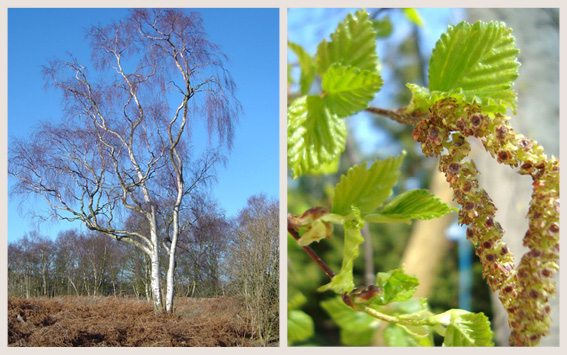 Instantly recognisable with its striking white bark, the silver birch is one of only two native birch trees in the UK. The silver bark sheds as the tree matures, leaving distinctive black diamond-shaped fissures. The silver birch provides a food and shelter for over 300 species of insects, ranging from caterpillars to ladybirds. 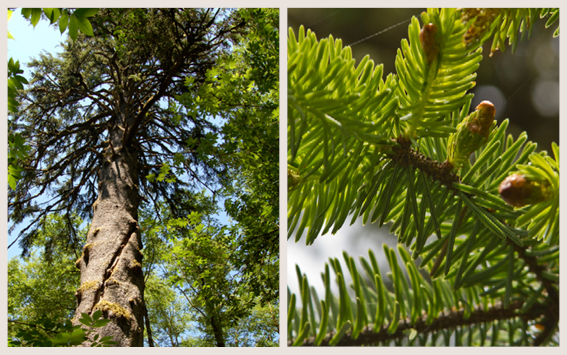 First introduced to the UK in 1831, the Sitka spruce is the primary timber species grown in the UK. Originally found in northwest America, the Sitka spruce thrives in the damp elevated ground found in the north and west of the UK. Frequently used in paper production, construction materials, plywood and musical instruments, the Sitka spruce can grow up to 70 metres tall and is very versatile.

Each year, over 35 million Sitka spruce trees are planted in the UK, accounting for around 50% of commercial plantations. 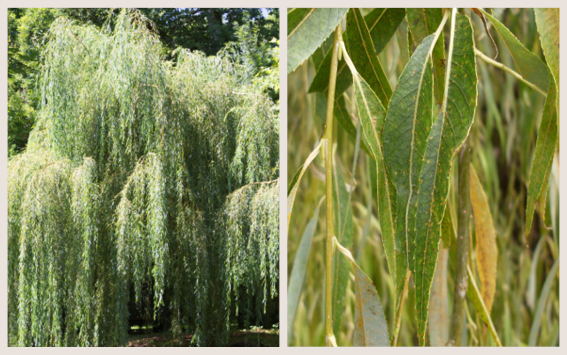 Most commonly found near rivers and streams, the Weeping willow is recognisable by its long, trailing branches with narrow leaves. Although native to northern China, it has been cultivated across Asia and Europe. The weeping willow grows rapidly, and can grow up to 25 metres tall. However, they have a short lifetime of between 40 and 75 years.

The catkins that appear in early spring provide an important source of early nectar and pollen for bees and other insects. Like all willow trees, its bark contains salicylic acid, derivatives of which are used to treat acne and to reduce fevers and pain. 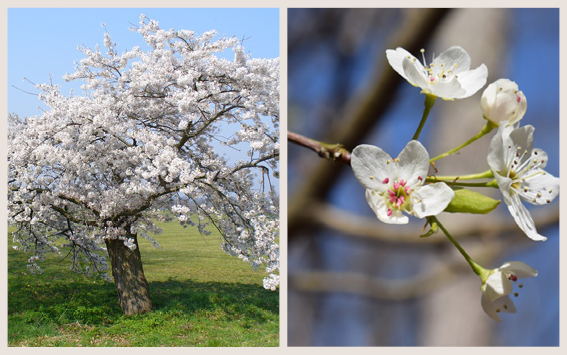 The wild cherry tree is characterised by the beautiful white flowers that bloom in April. These spring flowers provide nectar and pollen for bees, whilst the dark red cherries act as a tasty source of food for birds, as well as mammals such as the dormouse and badger. Wood from the wild cherry tree is a deep reddish-brown, and is used for creating decorative furniture. 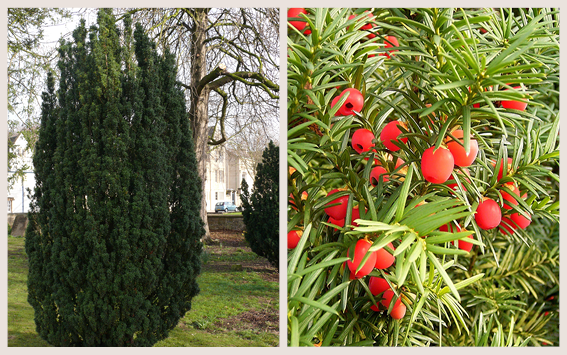 Did you know that 10 yew trees in Britain are thought to predate the 10th century? One tree, located in the village of Fortingall in Scotland, is estimated to be between 2000 and 3000 years old! Yew trees were traditionally used to create longbows and yew trees are often considered indestructible – however, they can be prone to root rot.

There are plenty of resources to help you discover more about protecting the trees of the UK: